Central bank action in the UK and euro-zone has boosted the investment-grade corporate bond market. Lynn Strongin Dodds examines whether this can continue

• Investment-grade corporate debt remains attractive on the back of the European Central Bank and Bank of England corporate bond buying programmes.
• The US remains the most attractive investment-grade market, but a rise in interest rates could dent its popularity.
• The banking sector seems to be the most promising in Europe based on valuations owing to restructuring and tighter regulation taking effect.

Investment-grade corporate credit has become the darling of the fixed income world on the back of the European Central Bank (ECB) and the Bank of England’s (BOE)corporate bond buying programmes. They are pushing returns to ever-loftier levels and while many expect such debt to remain attractive for some time in Continental Europe, there is less certainty about the UK.

On the mainland there are three key drivers behind the rally, according to David Zahn, head of European fixed income, Franklin Templeton Fixed Income Group. First is low global yields with many of Europe’s five-year core government bond yields turning negative, which has prompted investors to rotate out of governments and into corporates. Second, he notes that the ECB has bought more corporate assets – €16bn – than initially expected, putting pressure on companies and causing spreads to tighten. “It is certainly the case for European issuers, but we are now seeing the effect on non-European corporates who are issuing in euros as they look to take advantage of the supportive market dynamics fuelled by the ECB’s QE [quantitative easing] programme,” he adds.

The third driver is that economic growth, albeit sluggish, is still enough to fuel the sustained run in credit, which tends to perform well in slower-paced environments. “We believe growth will continue to be slower for some time and the ECB’s QE programme for both governments and corporates will continue, at least until March 2017, but may extend beyond that,” he adds. “So we think yields will continue to stay low, meaning investors will continue to look towards corporates and investment-grade specifically.”

One of the problems with the UK is that although the programme is smaller the impact will be the same because of the market’s lack of depth and liquidity. “If you look at [the] ECB programme, it is around €350m a day and if you extrapolate that until March 2017, then it is €70bn, which is around 4% of the total euro corporate bond market,” says Adam Whiteley, a global credit manager at Insight Investment. “By contrast, the BOE’s programme is only £10bn (€11.8bn), which is about £25m a day over 18 months and around 3% of the total sterling corporate bond market.”

Analysts also say the BOE could struggle because the UK corporate bond market is not the first financing port of call. Research from HSBC shows that over 70% of UK company-financing emanates from loans while 30% is from the bond market, typically the deeper euro and dollar pools. This may help explain Dealogic figures that show only £285bn in sterling investment-grade bonds on the market, compared with £1.3trn denominated in euros and £4trn denominated in dollars. 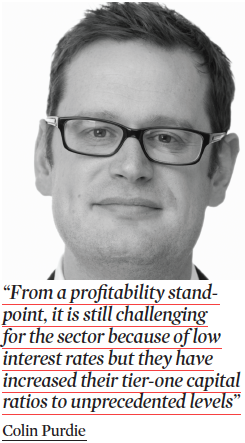 The hope especially among beleaguered UK pension funds is that the latest stage of the QE programme encourages highly rated companies to borrow at the long-end. Howard Cunningham, a fixed income portfolio manager at Newton Investment Management, though, is sceptical. He argues: “We have been here before. The BOE began purchasing corporate bonds in 2009, at the height of the financial crisis. Then there was real distress and their intervention was very supportive, but they only ever acquired £2.25bn of corporate bonds in total, and began selling them back in 2010 to aid two-way liquidity.

“Even if the [BOE] bought the entire £10bn over 18 months, this would still equate to a much smaller share of the available market than what the ECB is already actually buying, and there’s no guarantee that the bulk of it will be aimed at the long-end.”

For now, investors have been piling into global investment-grade funds since the ECB launched its programme in June. The latest data from Bank of America Merrill Lynch shows an inflow of $30bn since then. By contrast, $82bn has flooded out of equity funds during the same period.

In terms of investment, the general advice is to err on the side of caution. This means careful stock selection as well as searching for relative opportunities. As Richard Ryan, manager of the institutional multi-asset class credit fund at M&G investment, warns: “It is a mistake to take a credit risk at any price with the view that the returns will come from capital appreciation because you can sell the bond back to the central bank at a higher price.” 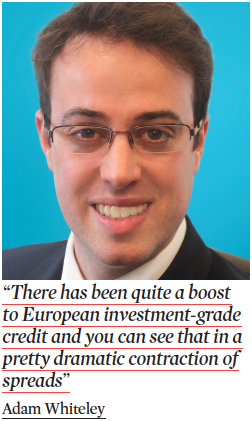 Ryan says there are significant risks on the horizon that in normal conditions would give investors pause for thought. These range from the Italian referendum and US elections in the autumn to the French and German elections next year.

Overall, though, the US is still considered to be the favoured market. The Barclays Capital Corporate Investment Grade index has not only climbed by 8.7% so this year but the market has considerable depth. At $6trn it is three times the size of the euro-zone plus it offers better relative risk-adjusted returns.

“The all-in yield is 2.8% in the US compared to 0.6% in the euro-denominated investment-grade corporate bond market and 2.1% in the UK,” according to Whiteley. “The dollar market gives greater ability to transact and also offers best value, particularly the long-end of the curve where there’s an extra 0.5% credit spread compared to the shorter end.”

However, fund managers are becoming more discerning. As David Riley, head of credit strategy at BlueBay Asset Management, points out, the US is relatively late into the cycle and overall levels of leverage are increasing, so it pays to have a bias towards the better-quality companies. The premium may be higher, but these names are also easier to sell when markets suddenly become volatile and less liquid.

Mark Kiesel, CIO of global credit at Pimco, favours sectors that are tied to the housing market, which is still in the middle stages of expansion, despite the overall late economic cycle. Also, on the list are companies that can benefit from the strong fundamentals in consumer spending, healthcare, cable and gaming, as well as energy, which the firm bought at the trough but are now in a recovery phase with management teams investing again.

One risk is the direction of interest rates. Much of the investment-grade corporate bond market is sensitive to higher levels, particularly long-term bonds issued by companies in recent years to take advantage of low rates. Predicting a rise is difficult as the Federal Reserve seems at a crossroads, with some committee members wanting to initiate a rise in September while others prefer to wait until December or early next year, after the presidential elections. 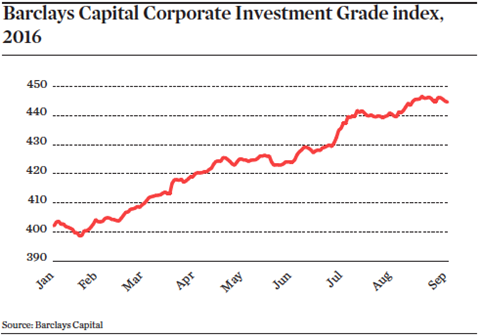 As for Continental Europe, much of the market is looking frothy, although the unloved banking sector is regaining its appeal among of fund managers. “From a profitability standpoint, it is still challenging for the sector because of low interest rates but they [banks] have increased their tier-one capital ratios to unprecedented levels and are repairing their balance sheets,” says Colin Purdie, global head of investment-grade credit at Aviva Investors. “The valuations are attractive because they are not on the ECB eligibility list but you have to be selective.”

Duncan Sankey, partner at Cheyne Capital, says the best way to play the European market is through credit default swaps because the ECB bond purchases have not had the same impact on credit default swap (CDS) levels as the spreads on many corporate bonds which have fallen significantly. “CDS are more liquid and fungible than bonds and investors can get a premium over the bond spread in many European credits when they sell a CDS contract,” he adds.

Currently, the credit spread is 35bps for the investment-grade issuers included in the iTraxx main indices. By contrast, figures from Barclays shows that the implied credit spread from selling a CDS contract is 66bps, almost twice that available from cash bonds. The gap between the two spreads is hovering near its highest level in three years since the ECB started buying corporate bonds.

Investors are also adopting a cautious stance towards the UK. Currently, the BOE has not specified which companies will be eligible for its programme, which will start in the middle of September. The only clue given is that it would be those that make what the regulator described as a “material contribution” to the UK economy. Banks and insurers are not on the list but analysts expect to see companies such as EDF, GE, Orange, Western Power, Walmart and Eon on the roster.

“There are pockets of opportunity but you have to really look for them,” says Ed Farley, managing director and head of the European corporate bond team at PGIM. “The hardest thing about the UK is the lack of liquidity which makes it difficult to participate during a rally. There will be relative trades but it is very much on a company by company basis.”