So the summer passes without too severe a sell-off in the light trading, although wariness has certainly affected much of the market sentiment, with uncertainties over the macroeconomic picture, and thus the Fed’s timetable. The US economy is undoubtedly growing, but nagging doubts linger over whether it might experience another downward lurch, which would be the third such blip since the economy first posted a healthy couple of quarters back in 2010.

Although US domestic sales are strong, showing the resilience and strength of the indefatigable US consumer, corporate America has yet to shake off its nervousness. Since 2010, firms have been quick to turn cautious at the first hint of a demand downturn.

Argentina and Portugal are providing additional points of interest, although it appears that neither country’s difficulties are currently likely to affect too greatly their respective neighbours, or the rest of the world.

Geopolitics is also causing increasing disquiet, with events in Gaza shocking the world, and tensions in Ukraine rising. US and EU sanctions may well tip Russia’s economy into recession, which would probably hit EU economies. However, of more concern is what President Putin might do next – it is this unpredictability that is particularly worrying for markets.

With quieter summer markets, and having a little more time on their hands, analysts at Goldman Sachs have been looking at ways of predicting, or giving warning of, the next crisis. Several factors have been recurring culprits in the various market crises over the decades, these being credit growth, asset price run-ups (particularly in housing) and current account imbalances. However, their studies seem to show that there is no clear set of conditions that are always manifest before the onset of each and every crisis.

Whereas growth seems to be underway in many developed economies, so far it has eluded Italy, the last of the G7 economies yet to recover to pre-2008 levels. Its economy actually shrank by 0.2% in the second quarter of this year. In fact, over the past 10 years, Italy’s inflation-adjusted GDP has grown at an average annual rate of only 0.3%.

With such paltry growth, economic reforms and debt servicing become even harder and Italy’s place in the EU fiscal deficit rankings has slipped, overtaken by the much-improved Portugal and moving into the second place behind the EU’s worst debtor, Greece.

The Italian bond market has done well in the bull run, as BTPs have traded in line with the other peripheral markets like Spain. Unlike the other economies, however, Italy appears to have achieved little in terms of reforms. Indeed, part of the economy’s wretched performance is explained by very weak exports; Italy’s international competitiveness has plummeted as its politicians have failed to make any changes to its rigid labour market. Painful but ultimately positive structural reforms have been much discussed by the politicians but the government has not shown itself able to enact anything serious.

It is hard to envisage BTP yields falling further if and when Bund yields start rising, and with its huge debts, Italy can ill-afford higher debt servicing costs. In a bond bear market, it is more conceivable that investors will demand bigger premia for their riskier bond holdings, and that there will be much greater discrimination between Italy and the other, now stronger, peripheral economies. 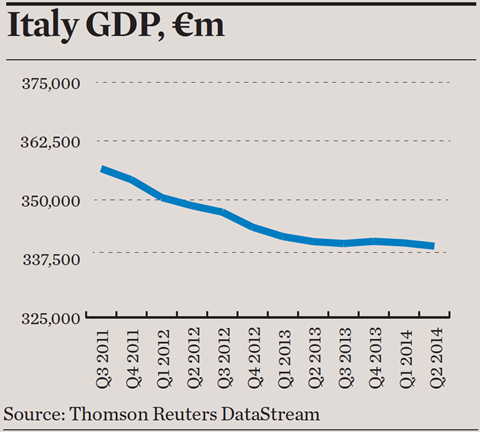 Although there was no wholesale summer rout impacting the range of markets, there were days when moves were quite severe. Ten-year US Treasuries had one of their weakest days in years after Q2 GDP came out, followed by the Fed’s July FOMC statement. It seemed to take a little while for the news that US economic growth really was quite strong and that the FOMC was sounding just a little hawkish for the first time in years to be assimilated, but once it was, bond markets sold off. Finally, it appeared that bonds were reacting to better economic news.

The European economy is posting patchy growth data with inflation still trending lower, and is undoubtedly far behind the US in the cycle. European rates, including those peripherals now trading at all time lows compared with Bunds, are also over-valued with respect to macro fundamentals.

Despite the fact that Europe’s official rates are staying low for much longer, if US Treasury yields are returning to more normal levels, then how likely might it be that longer-term rates in Europe’s bond markets could follow?

Japan’s bond market could take a different path. The Bank of Japan (BoJ) has kept up its strong rhetoric about reaching its 2% inflation target. Many observers, on the other hand, do not believe that this will be achieved. They contend that the BoJ will be forced to act, either by increasing its bond-buying programme or by some additional QE measures, which would thus maintain the downward pressure on JGB yields.

Conversely, the bond bears argue that Japan’s domestic pension funds and insurance companies are poised to reduce their bond holdings dramatically in order to rebalance their portfolios. They suggest that with one of the biggest portfolios preparing to do exactly this in October, the prospect of this selling of JGBs will more than offset the bond buying from the central bank, pushing up yields.

Until recently, when peripheral yield spreads were falling, the euro was strengthening, a two-year trend which at least partly reflected foreign inflows searching for yield. Since May, however, this relationship appears to have broken down, with the euro weakening, despite peripheral yields continuing their downward trajectory. Some argue that this decoupling is a result of foreign buyers now selling euros, having cashed in their peripheral bond holdings, and that those bonds are being bought by European investors.

With the US bond market now moving more towards macroeconomic fundamentals for its guidance, many are now asking whether the US dollar bull market might be under way. The bulls argue that several important factors, both structural and cyclical, are now moving in to place.

China’s move towards currency liberalisation should mean that the PBoC’s historic requirement for huge currency reserves – which were then channelled into US and other foreign bond markets – will be diminished, as the currency is allowed to float freely.

Globally, consumption and investment are on the increase as the world economy climbs out of recession. The huge savings surplus has thus probably peaked, and the demand for bonds and other yield instruments will moderate, pushing up nominal and real yields. With the US at the front of the cycle, and its rates (particularly at the short end) rising fastest, the dollar should be well supported.

Whereas China’s desire for a free exchange rate is reasonably assured, as things stand today, the question of whether the US economy, and with it the rest of the world, is embarking upon a self sustaining, strong recovery remains less easy to answer.