The challenges facing asset managers in 2018

The asset management sector faces “fundamental” challenges in the near future, despite the industry’s outlook stabilising, according to Moody’s.

The credit rating agency revised its outlook for the industry from ‘negative’ to ‘stable’ on a 12-18 month basis. In a report published this week, it said that most providers were adapting to shifts in investor sentiment.

Managers have been blending elements of active and passive management into smart beta and multi-asset products, and broadening the use and coverage of exchange-traded funds (ETFs).

However, Neal Epstein, a vice president at Moody’s, cautioned that there were still actively managed products “susceptible to passive substitution”, while managers also still faced strong competition on cost.

Mutual funds were starting to be seen as outdated and expensive structures by investors, Moody’s reported, citing a decline in the number of mutual funds available to US investors. Last year saw the lowest number of new fund launches in 10 years (439), while the 602 funds that disappeared through mergers or closed altogether was the highest level since 2009. 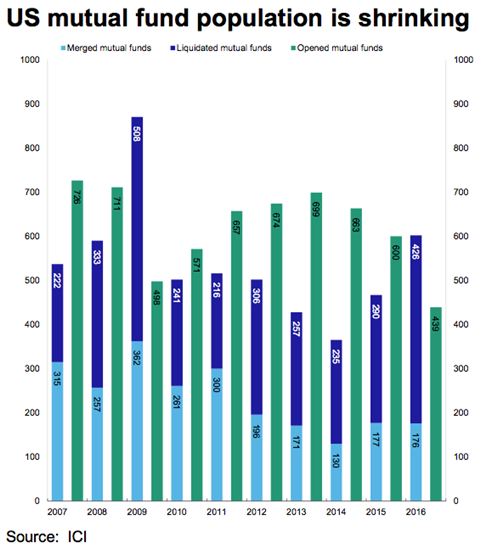 Moody’s also cited the effects of MiFID II, which comes into effect on 3 January 2018. The agency said the regulation was “likely to draw investors to use lower-cost funds”.

While global economic growth was “expected to remain strong”, Moody’s said, providers should be wary of the impact on their businesses when the situation began to change.