The UK’s automatic enrolment regime was not affected by April’s increase in minimum contributions, according to data from the country’s top three providers.

Figures from NEST, NOW: Pensions and The People’s Pension – collated by trade body the Pensions and Lifetime Savings Association (PLSA) – showed a minimal rise in members stopping their contributions after the contribution increase.

The PLSA reported that the proportion of people who stopped contributing to their pension rose from 3.3% in the first quarter of 2018 to 3.5% in the second quarter.

The increase included all kinds of “inactive savers”, the PLSA said, meaning that as well as those stopping their contributions, the number encompassed people who changed jobs or whose employer switched provider.

“All this suggests the impact of higher contributions on savers’ behaviour has been smaller than anticipated,” the PLSA said.

Data on members opting out of their scheme – classed as the number of people who leave the pension scheme within one month of joining – remained steady at 6.2% in the three months immediately following the contribution increase, the PLSA added.

In April 2019, the total contribution will rise again to 8% of salary.

“With small numbers making such a big difference, and many people saving for the first time, it’s vital industry and government continue to work together to sustain savers’ confidence in pensions and help people achieve the retirement they want.”

The Pensions Regulator has estimated that auto-enrolment has brought nearly 10m people into retirement savings for the first time. 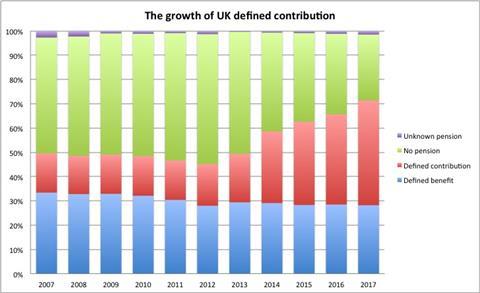