Private pension saving has allowed UK retirees to have 1.6 times as much disposable income as those relying on the state pension, data from the Office for National Statistics (ONS) has shown.

ONS figures published today showed that, on average, in 2016 UK pensioners drew 43% of their retirement income from private savings. This compared to just 17% in 1977. 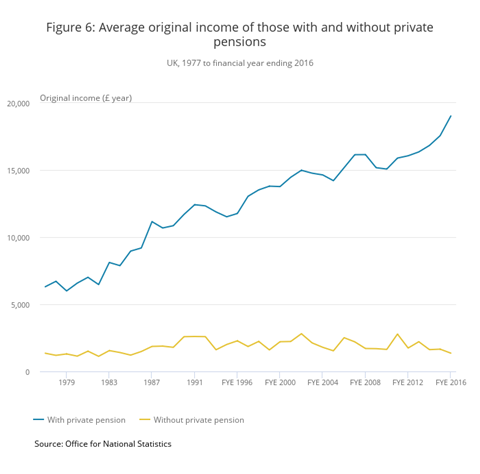 The change reflected the increase in pension saving and the number of pensioners drawing payments from guaranteed defined benefit (DB) schemes, the ONS said.

While other cash benefits and the effect of taxation reduced the gap between those with and without private pensions somewhat, the inequality in disposable income was still significant at more than £10,000 annually, the ONS said.

“Since [March] 2010, income inequality of gross and disposable income has shown an upward trend, though it remains small relative to larger increases seen in the 1980s,” the ONS said. “This indicates that cash benefits have become less effective at reducing inequality in recent years.” 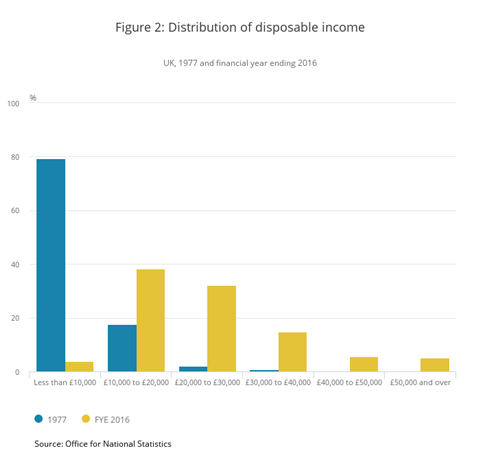 The future of the UK state pension was a major issue in June’s general election, with the Conservative Party expressing an intention to remove the ‘triple lock’, which guarantees an annual increase of at least 2.5%.

However, following the party’s loss of its majority in parliament and subsequent agreement with the Democratic Unionist Party, the triple lock was maintained.

The government last month announced plans to accelerate its timetable for raising the state pension age to 68.

Deficits at DB pension schemes in the UK narrowed in July, as assets grew on the back of a rallying stock market, according the latest data from the Pension Protection Fund (PPF).

The pensions lifeboat reported in its July PPF 7800 index update that the aggregate deficit of the 5,794 schemes on the list was estimated to have decreased over the month to £180.1bn, from £186.2bn at the end of June.

The schemes’ average funding ratio improved slightly to 89.4% at the end of July, from 89.1% a month before, the PPF said.

“Assets increased by 0.7% in July 2017 reflecting the impact of higher UK equity prices,” the PPF said, adding that the FTSE All-Share index rose by 1.1% during the month.

“We continue to believe that the uncertainty around the UK’s outlook warrants most pension schemes diversifying equity risk into well-selected alternatives, and holding sizeable liability hedging exposure,” he said.

RPMI Railpen, the investment manager for the Railways Pension Scheme, signed a deal with Axioma for the firm to supply a portfolio optimisation tool for its quantitative investment team.

Axioma said the alternative risk premia team at Railpen would use the product to model portfolios and risk tolerance.

Tony Guida, senior investment manager at Railpen, added: “For our in-house quant equity strategies we use several proprietary data and optimisation models. We needed an optimiser that can be integrated into our framework and that we can call using open source language.”

Axioma’s product was central to Railpen’s research and portfolio construction, he said, adding that its design was suited to the scheme’s hybrid setup and allowed the team to improve its equity models.

Railpen manages around £27bn of investments for the pension scheme’s 350,000 members.