UK urged not to backtrack on auto-enrolment contribution hikes

The UK government is “closely monitoring” the impact on employers and employees of last month’s mandatory increase in pension contributions under auto-enrolment rules.

The minimum contribution for workers in auto-enrolment defined contribution (DC) schemes rose last month from 1% of salary to 3%. The employers’ contribution rose from 1% to 2%.

In a written response this week to a question posed in the House of Lords, the UK parliament’s upper chamber, Baroness Buscombe – an undersecretary in the Department for Work and Pensions (DWP) – said the government was “closely monitoring the impact of the increases on both employers and individuals to inform our approach to supporting the second planned increase in contributions from April 2019”.

Next April, the minimum will rise again to 8% in total, with the employer contribution reaching 3%.

Baroness Buscombe added: “There has been a long lead in time to enable employers and individuals to prepare for these increases, with support and communications from the Pensions Regulator and DWP.

“The increased contributions were scheduled to coincide with changes to take-home pay [that] normally take place at the start of the tax year, to help minimise the administrative burden for employers.”

Malcolm McLean, senior consultant at Barnett Waddingham, warned that any delay to next year’s planned increase would be “a very retrograde step”.

“Many commentators have already expressed concern at the low level of minimum contributions required for auto-enrolment purposes,” he said.

“As of yet there appears to be no clear plan to increase them further beyond 8%. Even at this level, for many people, it will not deliver a meaningful pension income at retirement and will call into question the validity of the policy and consumer appreciation of it.”

Earlier this week the UK’s Office for National Statistics (ONS) revealed a record high level of pension participation, caused largely by the introduction of automatic enrolment in 2012. This brought 9.5m people into pensions by 2017, the data showed.

Nearly three-quarters of employees (73%) “had an active workplace pension scheme” as of last year, the ONS said, up from less than 47% in 2012. 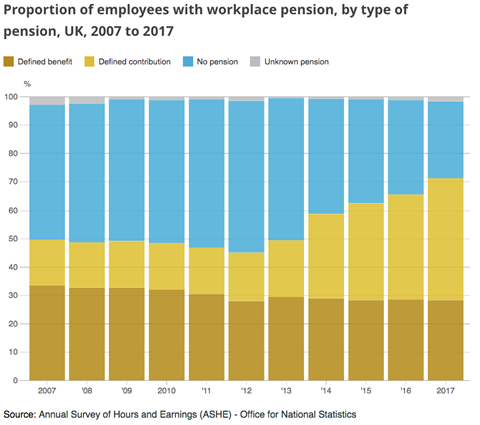 Sir Steve Webb, director of policy at Royal London and pensions minister when auto-enrolment was introduced, said this week that even the 8% contribution rate to be introduced next year would not provide an adequate retirement fund for most people.

“Nearly half all employers were contributing the bare minimum of 1% of wages in 2017, and it seems likely that they will continue to contribute at the legal minimum level as contribution rates rise into 2019,” he said.

“A combined contribution rate of 8% between worker and firm is simply not good enough for most people. The hard work of automatic enrolment will be in supporting workers and firms to get these contributions up to more realistic levels.

“The single most important thing that the government could do would be to ensure that when people get a pay rise they automatically increase their contribution rate unless they actively opt out.

“We know that this approach works in the US and it is time to do the same in the UK if we are to avoid a generation of workers who will simply be unable to afford to retire.” 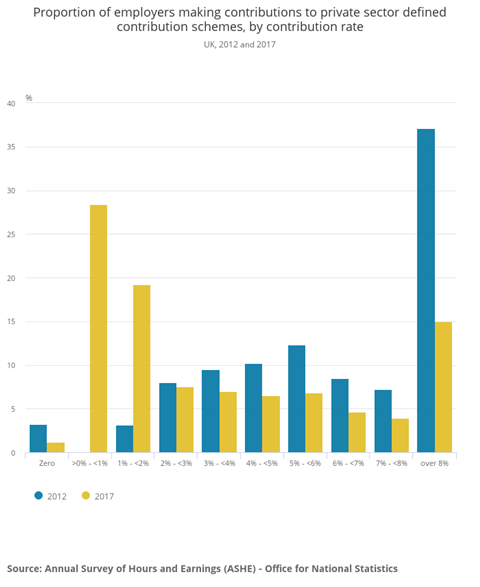 According to the ONS data, despite the significant improvement in coverage, average contributions have “clustered at minimum levels”.

Last year almost half of private sector companies contributed less than 2% to their DC schemes, the statistics bureau said, down from 6% in 2012.

However, the ONS said this was not necessarily due to employers paying less, “rather that automatic enrolment has led to an influx of new savers at low rates, changing the distribution of employer contribution rates”.