This was meant to be the year when things went horribly wrong. A few years ago, when asset managers talked about market prospects, they often pointed to 2020 as the year when the world economy could run into difficulties. Perhaps another recession or another financial crisis would hit.

Of course, asset managers generally prefer to be upbeat about global prospects, particularly when they talk to potential clients such as pension funds. They have a vested interest in talking up market opportunities and talking down the risks. Having a relatively sunny disposition probably also helps them do their job.

However, such optimism clashes with one of the few certainties in the financial markets. At some point, markets will crash and economies will turn downwards (not necessarily in that order). The timing is uncertain but eventually there will be a correction.

The easiest way to tackle this conundrum, the clash of short-term optimism against the certainty of a future correction, is to project any problems to a safe distance in the future. So next year, and probably the year after, should be fine but some time further in the future might be different.

As the suspect year approaches, the outlook has to be reposed. Publicly stated attitudes towards its prospects typically become more upbeat.

As it happens, it looks like the world narrowly missed a financial crisis in September 2019. According to plausible reports the repo markets, for short-term borrowing in government securities, almost seized up. It is suspected that an unnamed US financial institution was close to failure as it was facing the prospect of having to pay punitive rates for repo market borrowing.

In the event, the Federal Reserve injected huge amounts of liquidity. Other central banks, including the European Central Bank, made similar moves. All talk of quantitative tightening was forgotten, although central bankers were loath to describe the extension of unconventional monetary policy as another round of quantitative easing (QE). 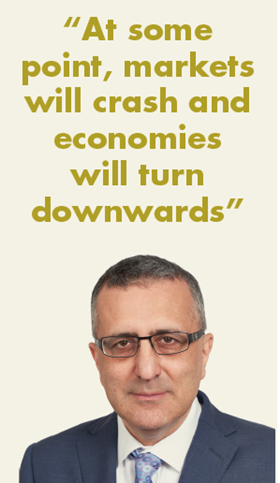 Asset prices benefited from this liquidity surge. Gold, often a bellwether of political and economic difficulties, was among the strongest performers (see here). Many other asset classes gained. The world economy was stabilised once more.

Now it looks likely 2020 will be reasonable, although not spectacular. President Trump will certainly do all he can to avoid any kind of market downturn in an election year. He would be particularly vulnerable to a reversal as he has been quick to take credit for the strong performance of stocks during his presidency.

We live in a peculiar investment environment in which underlying economic weakness – as indicated by stagnant productivity growth and sluggish business investment – coincides with an incredible capacity for resilience. It is a perilous stability.