In this first article on a new study, Pascal Blanqué and Amin Rajan outline how pension funds are adopting new asset allocation models and governance practices

Two of the four worst bear markets of the last century rocked the world of investing over just seven years in the last decade. They sidelined conventional wisdom on risk premia and diversification.

The ensuing quantitative easing by central banks on both sides of the Atlantic has further served to weaken the link between market prices and their fundamental value drivers.

Now, Europe is stalked by the shadow of secular stagnation. Neither growth, nor inflation, are anywhere near their desired trajectories. Monetary and fiscal policies are now testing their outer bounds with a fresh round of quantitative easing by the European Central Bank.

The upshot is clear. Investors no longer manage risk, they manage uncertainty: the first relies on the known probabilities of future returns, the other on guesswork.

Hence, pension plans have been forced to explore new investment horizons in the belief that markets are unlikely to normalise any time soon, according to a new survey by Amundi Asset Management and CREATE-Research entitled Alpha behind Alpha: Rebooting the Pension Business Models*.

Rates will remain low for a significant period, while plan liabilities will be rapidly maturing as the first – and the largest – cohort of post-war baby boomers enters retirement.

The lethal combination of market upheavals and ageing demographics has led a growing number of pension plans to revamp their business models by turning the spotlight on three key areas: asset allocation, governance practices and strategy execution.

The great financial crisis was the catalyst. The unprecedented scale and speed of the sell-off killed off the old dictum of ‘fix asset allocation and the numbers will follow’. The new wisdom is that performance depends on a symbiotic interaction between asset allocation, governance and execution.

Prior to the two bear markets of the last decade, 80% of portfolio returns came from intelligent asset allocation. Now, the figure has reportedly fallen to 50%. The rest is attributed to implementation.

From old to new
The excess liquidity flooding global markets over recent decades has sidelined the three tenets of conventional wisdom: risk generates returns, the risk premia of most asset classes are relatively stable and diversification delivers a free lunch.

The traditional diversification, based on a 60:40 equity/bond mix, came unhinged when it was most needed. The iconic Yale model favouring alternatives fared just as badly as the long-only model favouring equities and bonds. It was a defining moment. The old approach began to morph in the face of the appalling reality of funding numbers. 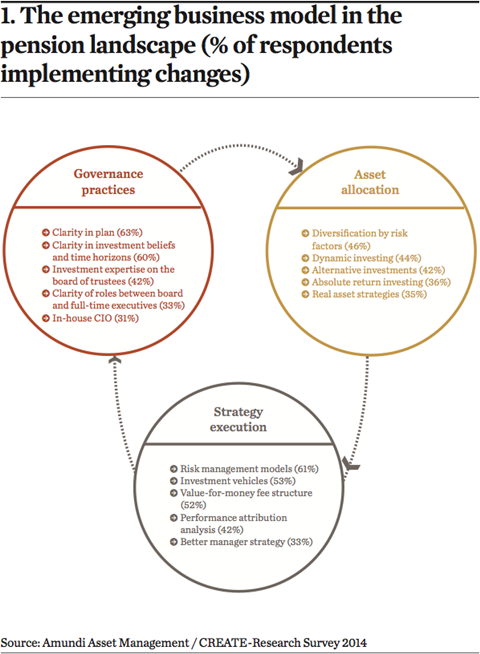 There is a growing belief that the world of investing is reverting to its pre-1982 days when high volatility and time-varying risk premia were the norm. The raging bull market of 1982-2000 was a historical aberration on this argument, caused by the US Federal Reserve’s over-eagerness to pump fresh liquidity at every whiff of a market correction. Quantitative easing is the latest in a series of tools to artificially fuel the markets.

Hence, notable improvements have been made in each of the three areas of pension business models, shown in figure 1. Thus, pension plans are switching to new areas like absolute return investing, dynamic investing and risk-based diversification. Liability matching is in the ascendancy over asset growth.

In the process, governance is acquiring a pivotal role. Greater clarity on ‘soft’ issues like mission, goals, beliefs and time horizon of pension plans is regarded as vital in making more intelligent asset allocation decisions. Such clarity is also backed by structural improvements – like enhanced investment expertise on the board, delegated authority to full-time executives and an in-house CIO – to secure nimbleness in today’s real-time markets driven by 24-hour news cycles.

To complete the circle, improvements are evident in execution capabilities. These include value-for-money fee structure, improved risk management, better manager selection, the right choice of investment vehicles, and judicious use of derivatives, shorting and leverage. Any strategy is only as good as its implementation.

The biggest change centres on risk management. Risk’s causes are being separated from its consequences; its management from its measurement; its time dependency from its randomness. Risk within the investment period is more important than risk at the end of it. That’s why dynamic investing is on the rise. Crucially, volatility is no longer the key measure of risk; instead, risk is defined by the maximum drawdown that trustees are willing to tolerate in a given year.

The scorecard
When assessing the changes to the business models, our survey has separated extent from outcomes. The extent of changes in each of the three areas of business models has been both pervasive and significant (figure 2, upper panel).

In asset allocation, 56% describe changes as being to a ‘large extent’ and 32% as to a ‘medium extent’. The respective figures for governance practices are: 57% and 26%; and for strategy execution 46% and 33%.

Thus, over 80% of respondents have implemented changes on a large or medium scale – mostly the former.  Larger and medium-sized plans have been more innovative.

Turning to their overall outcomes (lower panel, figure 2), the majority cite them as ‘good’ or ‘very good’ – mostly the former in all three areas. Notably, around a third of respondents are ‘unsure’ about the outcomes at this point in time. This is unsurprising. Many of these changes imply a shift in attitude that evolves over time.

For individual pension plans, innovation in investing requires new skills and new mindsets – especially in governance practices. For example, national regulations enjoin trustees to exercise the highest level of diligence in all aspects of plan operation, while remaining nimble in today’s markets where noise exceeds signals.

Such balancing acts require new ways of thinking as well as new ways of working. These take time to evolve, especially when peer risk and career risk are always in the background.

It is hard to tell whether the changes are only as durable as the crisis that provoked them. So far they have had strong tailwinds from the market rally since 2011. The real test will come with the next headwinds. Most of the changes have not had their mid-life crisis yet. 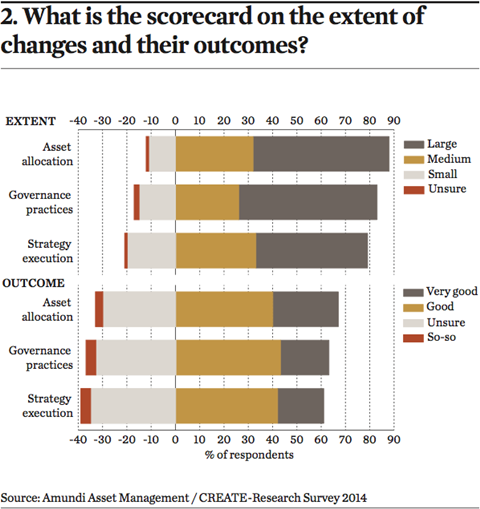 Variety of goals
As liabilities mature, high returns are no longer the be-all and end-all. Currently, around a third of plans have a funding ratio over 100%, a further third between 80% and 100%, and the remaining third under 80%. To meet their liabilities, 51% of plans are currently targeting up to 5% return on their portfolios (net of fees). The rest target over 5%.

These look aggressive alongside past experience. They also look ambitious because around 45% of plans are now in cash flow ‘negative’ or ‘neutral’ territory – mostly the former, owing to shifting demographics.

This, in turn, has dampened their risk appetite: 8% cite it as ‘high’, 61% as ‘medium’, 29% as ‘low’ and 2% as ‘minimal’. Accordingly, the one-size-fits-all approach to asset allocation is history. Three approaches are evident, each with clear aims.

The first one is product focused. This has been adopted by around 40%. It relies on a hybrid blend of single strategies – on a stand-alone basis – to achieve good risk-adjusted returns consistent with the overall policy benchmark.  Some deploy risk parity in the overall portfolio; some use specific long/short funds.

The second approach is time focused, which has been adopted by around 30% of plans that are already in the run-off phase with a significant and rising number of retirees. Their asset choices target regular income, steady cash flow and inflation protection, favouring real estate, infrastructure, alternative credit and deep value equities.

The third approach is LDI focused, adopted by around 30% of plans that are aiming to immunise risks via an overt glide path that straddles both the accumulation and decumulation phases. Their return-seeking and risk-hedging assets are augmented by surrogate assets that have equity-like returns, but bond-like features.

Minimising implementation leakage
One key lesson from the bear markets of the last decade is that there is the world of theory and the world of practice. The ex post returns rarely match the ex ante promises.

The gap is explained by implementation leakage caused by external and internal factors. They work in a mutually reinforcing manner to the extent that career risk and reputation risk take precedence over investment risk in the pension value chain.

Concerted attempts are being made to tackle them head on. One element is the steady rise of passive funds. They are likely to rise from 20% of total portfolio allocations to 40% by the end of the decade. In order to understand their risk drivers at the most granular level, passive funds and multi-asset class funds are now treated as special vehicles for reducing the leakage.

Another element enjoins asset managers to decouple marketing from thought leadership and pension consultants to walk a fine line between value investing and value traps. The time has come for a new implicit contract that minimises the time-honoured principal–agency problem and leverages the collective wisdom of all the players in the value chain.

Concluding remarks
Externally, the financial crisis exposed weaknesses in asset allocation. Internally, it exposed fault lines in governance practices, which had been a taboo subject.

The ensuing changes run with the grain of what is needed in today’s environment. The new approaches are being constantly modified and fine-tuned. But, they have some way to go before they are embedded in the cultural fabric of existing business models.