Jean-Paul Delevoye, the man responsible for laying the groundwork for a major pension reform in France, has presented his official recommendations to prime minister Edouard Philippe.

Delivery of the report comes after more than 18 months of consultation and exchanges with trade unions, employers, citizens and other stakeholders in the retirement system. Delevoye presented the recommendations to the social partners today before presenting them to the prime minister.

In keeping with the plan outlined by president Emmanuel Macron during his campaign, the main thrust of the proposed reform was the creation of a universal unfunded pension system to replace the current setup, which involves 42 different mandatory schemes. The same set of rules would apply to all regardless of their occupation.

The country’s so-called “special” regimes – privileged arrangements for public sector employees of the state railway operator SNCF, the Paris metro company RATP and state utilities such as EDF – would be closed.

If the reform is fulled enacted, it could also spell the disappearance of French pension investors such as ERAFP, which manages the compulsory top-up scheme for civil servants.

As anticipated, the system outlined in Delevoye’s report was points-based. Personal retirement accounts would allow individuals to track their ‘points’ so they can choose when to retire. The value of a ‘point’ would be guaranteed and indexed to average incomes in France, which was more favourable than inflation, according to the report.

A “universal reserve fund” would guarantee the preservation of a point’s value in the face of demographic and economic risks, it added.

IPE was unable to obtain further information about this fund by the time of publication. Af2i, the French institutional investor association, has emphasised the importance of reserves for the targeted new system.

Another recommendation made by Delevoye was for civil servants and waged employees, either in the private sector pension scheme or special regimes, to have identical contributions. The report put forward a contribution rate of 28.12%, split 60-40 by employer and employee.

Civil servants and those currently in the special regimes would also accrue pension rights on the totality of their pay, including all of their bonuses as opposed to only part of them, as is currently the case.

The statutory retirement age would remain at 62 years, but the age at which an individual would be entitled to a full pension would be linked to life expectancy.

The report recommended that the “full pension age” be set at 64 years for those born in 1963, which was the average age at which this generation was projected to retire. According to the report, this would give people the “optimal” return under the system, which on the basis of current hypotheses would be 5.5% – equivalent to an annual pension of €5.50 per €100 of contributions. 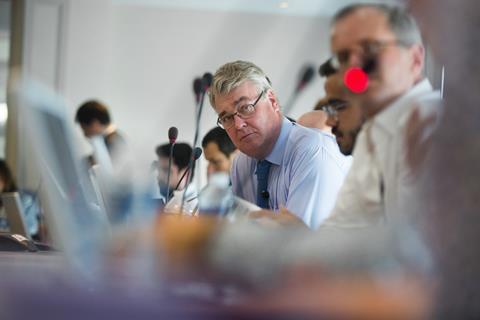 The prime minister has asked Delevoye and Agnès Buzyn, the minister for solidary and health, to begin a “first phase of listening” from next week to receive reactions from trade unions and employer associations. Delevoye is due in front of parliament on 24 July.

Following this the prime minister will detail the schedule and method for consulting on and preparing the bill to implement the reform. The new system is supposed to be in force from 2025.

Last week an independent pensions body reporting to the government – the comité de suivi de retraite – said the reform, on the basis of the information available, was a change of “such large magnitude” that it was “necessarily very complex to put into practice”.

One of the conditions for success, it said, would be the clarity of the “messages”, about the characteristics of the targeted system as well as the measures that might be required for the transition.