Pensions assets across the globe surpassed $36trn (€32trn) in 2014 after a strong surge in Australia, Mexico and Hong Kong offset slower growth in Europe.

The average growth rate of pension assets in the 16 largest markets was 8% on an annualised basis between 2004 and 2014, research from Towers Watson showed.

Its annual ‘Global Pensions Assets Study’ showed a 6.1% rise in global pension assets, in US dollar terms, with the US, the UK and Japan still accounting for more than 75% of that figure.

Rising assets in Mexico (19%), South Africa (13%) and Hong Kong (10%) supported the growth of the overall industry, calculated on an annualised basis in local currency between 2004 and 2014.

Towers Watson said the Netherlands led the way over the course of the year, with more than 20% growth in assets, closely followed by France, Germany and Ireland.

Switzerland and the UK both saw more than 10% growth in assets, with Brazil the only major pensions country to experience a fall, with close to negative 5%. 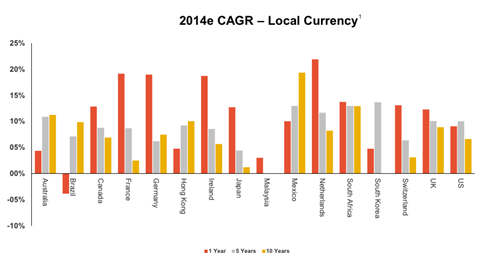 Pension asset growth over one, five and 10-year periods in local currency terms

Assets at the end of 2014 accounted for 84% of global GDP, compared with just 54% six years earlier.

“While there has been a significant improvement in various pension balance sheets around the world since the financial crisis, many DB pension funds are still in very weak solvency positions,” he said.

“The acid test for national pension systems should be to get assets to at least 150% of GDP. If that were combined with an improving recognition of good governance as a return driver and sustainable investing as genuinely value adding, it would put the pensions world in much better shape.”

Only the Netherlands (166%) surpassed the 150% figured cited by Urwin, with the US, Switzerland, the UK and Australia joining the Dutch in surpassing the 100% mark.

Towers Watson also said the seven largest pensions markets tinkered with asset allocation over the course of 2014, with 42.3% in equities, 30.6% in bonds and 24.8% in alternatives.

Allocations to bonds increased over the year, alternatives decreased and equities remained level.