The UK government’s forthcoming white paper on defined benefit (DB) pension reform could be the “last chance” to make large-scale changes to the sector, according to the Department for Work and Pensions (DWP).

Charlotte Clark, director of private pensions and stewardship at the DWP, said her team was aiming to publish the document by the end of February 2018.

Speaking at the Pensions and Lifetime Savings Association’s annual conference today, Clark said the paper would not lead directly to legislation but instead would aim to set out a “direction of travel” for changes to the DB system.

“One of the things I impress upon myself and my team is that I think this is probably our last chance to make changes to the DB sector,” Clark said.

“Ten years from now, any white paper on DB is going to be quite a different beast. [We are] taking the time and really thinking through the issues, not just those we’re facing now, but what we believe this sector will look like in 10 years time and beyond. What are the things we can do to secure members’ benefits and ensure the sector is sustainable going forward? That is where our focus is.”

The paper will build on a wide-ranging report released by the DWP under the previous pensions secretary, Richard Harrington. The report explored ideas and challenges for scheme consolidation, changes to indexation, and how to make it easier for stressed employers to restructure their schemes. 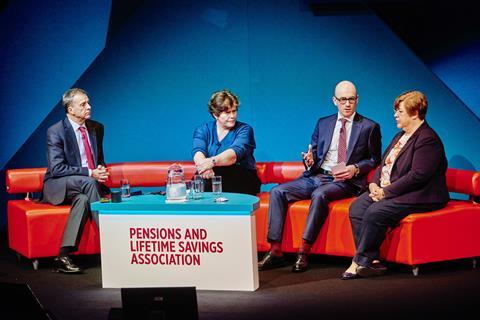 Clark and fellow panellists Chris Hogg, outgoing CEO of Royal Mail Pension Trustees, and Lesley Titcomb, chief executive of the Pensions Regulator, all echoed the government’s stance that there was no widespread crisis in the DB pension sector, despite public scrutiny of several high-profile schemes.

Earlier this year in response to the DWP’s paper, the PLSA argued that two groups of schemes deemed to have the weakest sponsor covenants had only a 50% chance of reaching fully funded status in the next 30 years. The weakest group had only a 32% chance. These schemes accounted for three million members, the PLSA said.