Since last summer, it’s relatively easy to invest in carbon credits. In August, Wisdom Tree launched the first ETF that tracks the price of European carbon credits that have been issued under the European Commission’s Emissions Trading Scheme (ETS).

The launch has prompted Dutch asset manager NN IP to include carbon credits in the commodities bucket of its multi-asset model portfolio. Carbon credits are “an interesting alternative to fossil fuels”, according to portfolio manager Jesse Borst.

In its multi-asset model portfolio, NN IP now has a 1% allocation to carbon credits. Moreover, carbon credits are currently the only ‘commodity’ the firm has exposure to. “We like the asset class, and the allocation could rise further,” said commodity strategist Koen Straetmans.

The price of carbon credits has risen steeply since the introduction of the Market Stability Reserve (see box), from around €20 to €60 per tonne. NN IP expects the carbon price to rise further in the years ahead, if only because the total stock of credits is being reduced by 2.2% a year from 2021.

The Emissions Trading Scheme (ETS) is the main instrument for the European Commission’s climate policy.

The Commission auctions carbon credits each year, that companies need to buy to compensate their emissions of greenhouse gases. The ETS currently covers 40% of the EU’s emissions.

The most important industries included are the energy sector, airlines and the manufacturing sector. Part of the credits, such as most of the allocation to airlines, are distributed for free according to strict rules.

Carbon credits are being traded since 2005, but the system gained real traction only in 2019 when the Market Stability Reserve was introduced.

“Until that moment there was a structural oversupply of credits which kept prices low,” noted Koen Straetmans, a commodity strategist at NN IP.

The Market Stability Reserve can be used to back-load credits from the market to reduce supply and increase prices.

A higher carbon price should serve as an incentive for companies to reduce their own emissions. Against current prices, the European market for carbon credits is now worth around €500bn.

While the price of carbon credits correlates with fossil fuel prices on the short term, its long-term trajectory is policy-driven: if European emission rules get stricter, the supply of carbon credits shrinks and prices will rise accordingly.

“The carbon price must rise to make new, green technologies competitive. To be able to produce green hydrogen competitively, for example, you’ll need a carbon price of at least €100. For container ships to run on hydrogen you even need a price of €130,” Straetmans said.

But as carbon prices rise and the market share of green energy goes up, demand for fossil fuels will start to come down. 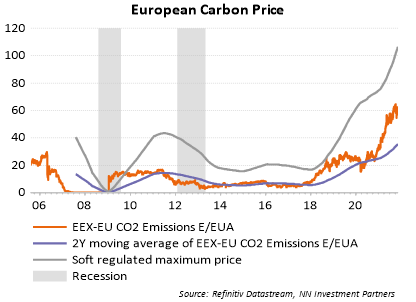 “As a consequence, fossil fuel prices as well as demand for carbon credits will be reduced,” noted Borst.

But when that happens, the European Commission can step in. “They have an interest in keeping carbon prices sufficiently high in order to reach the net zero goal in 2050. One can motivate the last remaining dirty companies to become green too by back-loading more credits to the Market Stability Reserve,” he said.

Straetmans and Borst have registered “a lot of interest” to invest in carbon credits with institutional clients. None of the firm’s pension fund clients have yet invested though.

Europe’s largest occupational pension fund ABP is also interested in the new investment category. A spokesperson said the civil service scheme is considering adding carbon credits to its commodity portfolio during the upcoming reshuffle of its commodity investments that will follow from ABP’s recent decision to divest from fossil fuels.

Only a handful of Dutch pension funds continue to invest in commodities strategically. Many funds, including PFZW and Bpf Bouw, have ditched the asset class in recent years following disappointing returns or because of ESG concerns.

Could pension funds return to investing in commodities now that they could replace fossil fuels with carbon credits? Borst is not sure. “Commodities don’t provide direct cash flows which makes the asset class less suitable as a strategic investment. Though some of our competitors do invest in commodities strategically, we mainly use the asset class for our tactical asset allocation,” he said.