The results of the German federal election held yesterday open the door to government coalitions that will likely have different approaches to designing pension policies, with a possibility to accelerate the modernisation of the system.

The election winner, Social Democrat Olaf Scholz, and the runner up, CDU’s Armin Laschet, are keen to have exploratory talks with the Greens and the Free Democratic Party (FDP) to form a government.

Another alliance between the Union, meaning the CDU and the CSU, and the Social Democrats (SPD) seems currently unlikely as the parties come out of current chancellor Angela Merkel’s era exhausted after three grand coalitions.

This would pave the way to two alliances at the end of likely lengthy negotiations – a so-called traffic light coalition, or Ampelkoalition, made of SPD, Greens and FDP, and the Jamaica coalition – referring to the respective colours of the parties and those of the Jamaican national flag: black for the CDU, gold for the FDP and green for the Greens.

Pensions policy would be designed with a closer eye in capital markets in the case of a Jamaica coalition, “thus the second and third pillars will be strengthened,” and this could also be achieved with the CDU, Olaf Stotz, professor of asset management and pension economics at Frankfurt School of Finance & Management, told IPE.

Laschet said CDU would “do everything in our power to form a government under the leadership of the Union,” calling a possible partnership a “coalition for the future” with the Greens and the FDP.

“We want to talk [with the Greens and to the FDP] to see if there is the possibility to build a coalition,” CDU’s general secretary Paul Ziemiak added in an interview yesterday evening. 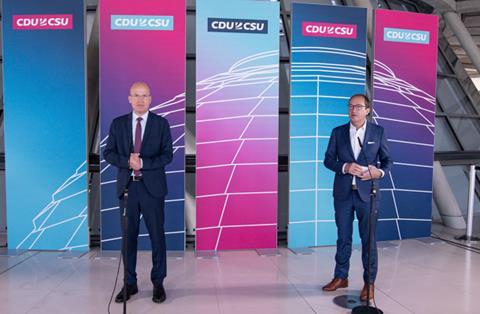 The Union has put forward the idea of a Generationenrente

The Union has put forward the idea of a Generationenrente with the state paying a monthly contribution to people from birth in a fund for investments.

The FDP proposes a statutory equity pension – Gesetzliche Aktienrente – to invest part of the contributions flowing into the system in stocks.

The idea of the Greens’ Bürgerfonds is similar, with contributions allocated with a long-term perspective to overcome short-term market fluctuations and based on ESG principles.

The election result is a “great opportunity” for a change of pension policy in Germany, according to Markus Roth, professor at Philipps University Marburg specialising in German pension law.

“The FDP and the Greens have forward-looking concepts that are not too far apart and that can form a common basis for future reform,” he told IPE.

According to Roth, “there is a chance that the reform of the pension system will become a central project of the next government”, looking at signals of possible preliminary talks between the FDP and Greens to eventually strike an agreement to build a cabinet.

For a traffic light alliance or a Jamaica coalition the subject of pensions will not be a top priority or a deal-breaker, according to Stotz.

The “classic Greens and FDP issues” such as “environment, tax, economy will be the focus of the discussions” to try to form a Jamaica coalition, he said.

Scholz believes that talks with the FDP this time should take place from an equal standpoint, looking back to the previous elections in 2017.

At the time the leader of the Free Democrats, Christian Linder, pulled the plug on negotiations about a Jamaica coalition accusing the potential partners of being unable to build common trust and only placing roadblocks on the path to reach an agreement.

“Scholz is a respectable person but he has an electoral programme and a party behind him oriented towards the far left,” Lindner said yesterday evening, adding that the probability of bringing forward FDP’s ideas is higher with a Jamaica coalition.

For Stotz, pension policies would likely have a “higher priority” in a traffic light alliance than in a Jamaica coalition.

As the SPD, the Greens have set the priority of keeping the level of pensions to at least 48% of the average wage and to expand the statutory pension.

The SPD has positioned itself to strengthen the first pillar, and financing this position would require a clarification with the FDP, Stotz said.

Finding a common ground between FDP and SPD’s positions on pensions is more difficult than in the case of a Jamaica alliance, he added.

During the electoral campaign, the Social Democrats have clearly positioned themselves with regards to pensions, and this is perhaps why it has won over the “older voters,” Stotz added.

“It can therefore be assumed that the SPD will give much more weight to its pension [policy] issues in the negotiations,” Stotz said.