APG in talks with Festina Finance for admin contract

The Dutch pension provider APG is in exclusive negotiations with the Danish developer to provide a new system for defined contribution (DC) pension administration that it can use for the new pension contract.

Festina only recently entered the Dutch market and is yet to formally announce its first client in the country.

An APG spokesperson said the “exclusive negotiations” with Festina Finance were started “after a careful selection process”. Next to buying a software system (Buy), APG also considered the options to build a system in-house (Make) or in cooperation with an external firm (Ally).

“For every single initiative we take, we consider whether we should invest a lot of our own capacity to bring it live, buy it or partner up,” APG’s data and implementation lead Roel Moradi told the IPE Pensions & Technology Forum 2022 today.

Although APG is planning to buy its admin system externally, APG has branded the upcoming deal with Festina a “cooperation”.

“The technology will be developed further by our own people, in close cooperation with Festina and their expertise,” the spokesperson said.

The admin system APG wants to buy is Festina’s Life & Pension Platform. According to Festina, this system consists of several modules that fully support both the ‘solidarity’ and ‘flexible’ options of the new Dutch pension contract.

Festina is a newcomer in the Dutch market. It has been making pitches to Dutch pension funds since 2020 and only opened an office in the country a few months ago. It has, however, been responsible for developing the admin system for PensionDanmark, a large Danish pension fund, when it made the switch to a DC system.

Festina is currently planning to grow its workforce in the Netherlands further, from its current headcount of five.

Commenting on the news, Festina’s Netherlands director Peter Klos emphasised “nothing has yet been signed”, but added he is “proud” to have entered into exclusive negotiations with APG. 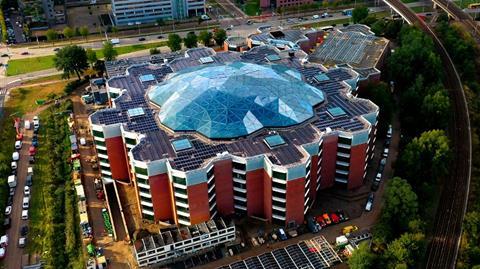 APG’s new headquarters on the outskirts of Amsterdam

A source within APG close to the selection process who requested anonymity said that Festina being a foreign firm with limited experience in the Netherlands has not been a “barrier” in the selection process. To the contrary, there is a strong cultural fit, according to the source.

Festina scored best on the selection criteria, the most important of which were the flexibility of the system and knowledge about the sector, the source said. Festina’s ability to provide “countervailing power” also played an important role in the decision. “This ensures an adult-like relationship,” the source added.

APG’s workers council gave positive advice on the deal. Its president Luuk de Ridder said: “We trust that no jobs will be lost in the coming years. This does not only relate to the construction of the system but also to the management of the infrastructure.”

De Ridder does, however, require APG to draft a plan to educate its own staff to be able to work on the system independently. “This way the dependence on the provider will be reduced,” he added.

APG’s largest clients – ABP and BpfBouw – have responded to APG’s proposed deal with Festina with cautious optimism. While ABP said it had been involved in the selection process which it is following “with great interest”, director David van As of BpfBouw said his fund “has full confidence in the selection process carefully designed by APG, its preliminary choice [for Festina] and the upcoming negotiations”.