The European Commission is going to “support a process” to develop European non-financial reporting standards, according to Valdis Dombrovskis, Commission executive vice president.

In a speech delivered this week at a conference about the Commission’s climate change-informed economic growth plan – the European Green Deal – Dombrovskis said the Commission would be inviting the European Financial Reporting Advisory Group (EFRAG) to begin preparatory work on the standards as quickly as possible.

The existence of many overlapping international reporting standards and set-ups confused companies and investors, who also found this situation expensive, Dombrovskis said.

“The EU is well placed to address this situation – and show leadership in building consensus for a set of standards that can be widely accepted,” he continued.

His announcement came as the Commission prepares for a review of the EU’s Non-Financial Reporting Directive later this year, with Dombrovkskis indicating there would be a limit to how much disclosure would be prescribed in a revised version of the legislation.

“Not every detail can – or should – be fixed in law,” he said. “There is also a need for clear reporting standards for companies to apply.”

A European Commission spokeswoman told IPE it was “normal practice” in the world of corporate reporting for standards to accompany legislation and that it was possible this could also become the case with regard to non-financial reporting.

She said the Commission expected to reach an agreement with EFRAG by spring on the work it could do.

The upcoming review of the NFRD and Dombrovskis’ fresh announcement about European standards comes as investor bodies have been calling for improvements in the availability and quality of non-financial data about companies.

Aleksandra Palinka, senior regulatory policy advisor at the European Fund and Asset Management Association (EFAMA), said the group welcomed the Commission’s intention to support the development of non-financial reporting standards given that, as Dombrovskis said, not every detail could or should be fixed in legislation.

However, consistency at international level was key, she said.

“If European standards were to be developed, it is important to build on existing international frameworks,” she said.

Charles Tilley, CEO of the International Integrated Reporting Council (IIRC), which provides a framework for company reporting, made a similar point.

“Any European solution will ultimately need to be a global solution”

“The environment does not acknowledge borders,” he said. “Any European solution will ultimately need to be a global solution and whilst we congratulate the European Commission on their leadership on this urgent matter, we encourage them to create something that can be applicable globally.”

The EU Council, the body for the bloc’s member states, last year suggested the Commission consider the development of a European non-financial reporting standard. The measure was one of several outlined by the Council in a document about its ideas for the next stage of the Capital Markets Union project.

Building on what exists

In his speech Dombrovskis indicated the Commission would not be starting from scratch on reporting standards, but using as a starting point “the best and most widely accepted elements of what exists today” and tapping the expertise among “those organisations and individuals who can best contribute to the process”. 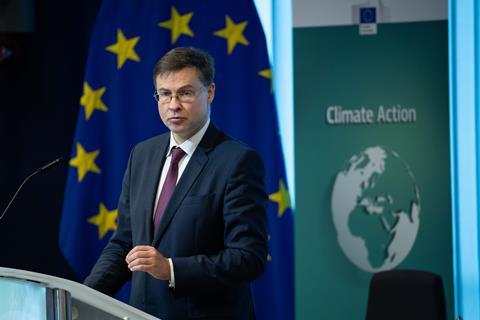 “Along with the new taxonomy system, better corporate information will be the cornerstone of our strategy,” he said. “I will enable financial market participants to disclose their sustainable investment to their clients.”

The IIRC’s Tilley welcomed the Commission’s intention to build on the work that had already been done in this domain.

“It is important that anything the European Commission creates is based upon the work of the standard setters and framework developers already prevalent in the market and it is right that executive vice-president Dombrovskis has committed to this,” he said.

EFAMA’s Palinska said investee companies and investors needed to be actively involved in any process of developing standards.

The EU Council, the body for the bloc’s member states, last year suggested the Commission consider the development of a European non-financial reporting standard. The measure was one of several outlined by the Council in a document about its ideas for the next stage of the Capital Markets Union project.

Since the end of 2018 EFRAG has had a forum for discussion on “non-financial topics”, the European Corporate Reporting Lab. It was established on the back of the Commission’s March 2018 sustainable finance action plan. Last autumn it announced that its next project would be on “Reporting of non-financial risks and opportunities, and linkage to the business model”.

A spokesperson for EFRAG said it could not comment on what was said at the Commission’s conference this week.

This article was updated to add comments from an EC spokeswoman.