BlackRock has endorsed a recent proposal from the IFRS Foundation for a sustainability standards board to address fragmentation in the area of corporate sustainability reporting.

In a third quarter stewardship report released today, the asset manager said the sustainability standards board idea was “the most practicable and likely to succeed” out of the various initiatives that had been recently launched with the aim of realising the objective of a globally recognised and adopted approach to sustainability reporting.

“We believe this board would work best to combine the best ideas to minimise the reporting burden on companies and achieve the optimal results for users of company reporting on sustainability,” BlackRock added.

The IFRS Foundation set out the sustainabilty standards board proposal in a consultaiton launched at the end of September. The proposal was hailed as a breakthrough by Dutch institutional investor group Eumedion at the time.

Anticipating it taking some time before the objective of a global standard for sustainability reporting was achieved, BlackRock said it envisaged a “two-track approach” to reporting in the near-term. This would involve “companies, investors and others contributing to efforts to achieve convergence, while simultaneously making progress on enhanced reporting under the existing frameworks and standards”.

BlackRock said it would continue to advocate for reporting aligned with the Task Force on Climate-related Financial Disclosures (TCFD) and the Sustainability Accounting Standards Board (SASB) framework.

The Task Force on Climate-related Financial Disclosures has launched a consultation on forward-looking climate-related metrics for the financial sector, with particular reference to the “implied temperature rise of investments” metric.

It said it would take responses into consideration to determine whether further TCFD financial sector guidance on forward-looking metrics was needed.

An “implied temperature rise” (ITR) metric attempts to estimate a global temperature rise associated with the greenhouse gas emissions of entities in a given investment portfolio or strategy. It is expressed in a single temperature unit or range that is comparable to potential climate outcomes, such as 1.5°C, 2°C, 3.5°C.

The metric has begun to be used and disclosed by some asset owners, with the TCFD mentioning AXA, Government Pension Investment Fund and French pension scheme Ircantec, among others. Amundi is piloting the use of such metrics for a set of equity funds. 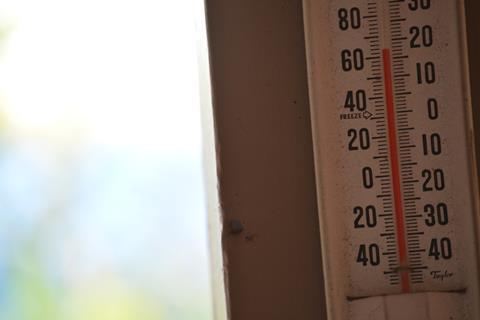 The TCFD said it was seeking input on whether, and how, ITR disclosure would be useful in financial decision-making, which types of organisations might disclose it, which types of investments it could address, “as well as its limitations, potential challenges, and what might be needed to improve its usefulness”.

The task force said it also wanted to understand alternative forward-looking metrics that could be disclosed by financial institutions in line with the TCFD recommendations.

The consultation was released in connection with the TCFD’s third status report.

Reviewing 1,700 companies’ reports using artificial intelligence technology, the TCFD found that disclosure of climate-related financial information aligned with the TCFD recommendations had steadily increased since they were published in 2017.

However, the TCFD said, the report also highlighted the continued need for progress. In particular, disclosure of the potential financial impact of climate change on companies’ businesses and strategies remained low, it said.

The task force also said its research indicated that “asset manager and asset owner reporting to their clients and beneficiaries is likely insufficient”.

The Church of England Pensions Board (CEPB) and the Council of Ethics for the Swedish National Pension Funds are among 64 investment institutions that have written to mining companies operating in Australia and worldwide, asking what action they are taking to understand and manage the risks of operations affecting indigenous communities.

Other signatories include PGGM, the Local Authority Pension Fund Forum (LAPFF), California State Teachers Retirement System (CalSTRS), and a number of Australian pension funds, besides asset managers such as AXA, DNB and Nordea.

The letter – whose recipients include Rio Tinto Zinc (RTZ), BHP and Vale – follows the international outcry after RTZ blew up two ancient caves last May at the Juukan Gorge in the Pilbara region of Western Australia.

The Joint Standing Committee on Northern Australia is conducting an inquiry into the destruction of the caves, to report by 9 December 2020.

“As with the issue of tailings dam safety, a single event has exposed a systemic issue across the mining sector”

The letter – whose signatories manage US$10.2trn (€8.6bn) in aggregate – said: “Our collective long-term investment means that we need to have real confidence in how the sector obtains and maintains its social license to operate with First Nations and Indigenous peoples, including Traditional Owners and Native Title holders. The events at Juukan Gorge have shown this is a significant risk for investors.”

It continued: “We believe that investment risk exists where there is a mismatch between a company’s stated approach to relationships with First Nations and Indigenous communities and what happens in practice.”

The investor group said it intended to gather responses from compabies before initiating a dialogue that would include input from community representatives.

Adam Matthews, director of ethics and engagement, CEPB, said: “As with the issue of tailings dam safety, a single event has exposed a systemic issue across the mining sector. Good practice exists within the sector and investors need to better understand the practices of companies to be able to ensure best practice becomes the minimum operating standard.

“This is a beginning of a long process.”