Norway SWF to cut number of stocks by 25-30%, shedding smallest

The Norwegian government today proposed omitting the smallest companies from the NOK11trn (€1.1trn) Government Pension Fund Global’s (GPFG) equity benchmark,  a change that could cut the number of individual stocks it invests in by between 25 and 30%.

Publishing its 2021 white paper on the country’s overall sovereign wealth fund, which includes the smaller, domestically-invested Government Pension Fund Norway, finance minister Jan Tore Sanner said the reference benchmark would be slimmed down in order to reduce costs as well avoid some of the complications of ownership.

Other key plans for the Norwegian SWF announced by the ministry this morning include a decision not to add any new countries to the fund’s emerging markets universe.

The ministry is also proposing a raft of measures to “strengthen” the ethical framework for the fund, by adding a new exclusion criterion for the sale of weapons, expanding the corruption criterion to include other serious financial crimes, and adding a criterion to target producers of cannabis as a recreational drug.

Tore Sanner told a press conference this morning: “We propose to simplify the GPFG’s equity index by reducing the number of companies in the index.

“This will save costs and reduce the complexity of management,” he said.

“At the same time, the smallest companies make up a very small part of the total market value of the index,” he said, adding that they made little contribution to improving the fund’s risk-return ratio.

Analyses showed that the number of firms could be cut to some degree without the return and risk characteristics changing much, he said. 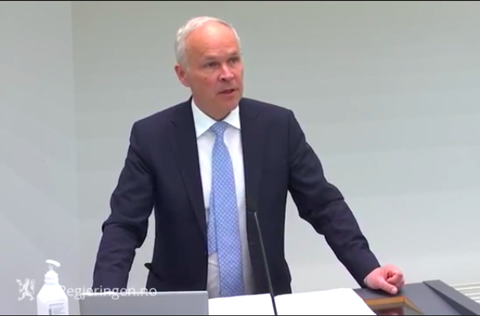 “A high number of small companies in the index also results in increased costs because the fund is large and it can be expensive to trade large amounts in small shares,” the finance minister said.

On top of this, he said, less information was available about small companies than on large companies, and the GPFG’s Council on Ethics believed that having fewer companies would facilitate its work.

According to the website of Norges Bank Investment Management – the central bank arm running the fund – the GPFG currently invests in 9,123 companies worldwide, holding on average 1.4% of all listed firms.

On the plan not to add any more markets to the equity sub-index for emerging markets, Tore Sanner said such markets were often characterised by weaker institutions, less openness and weaker protection of the interests of minority shareholders.

“There is also an increased risk associated with the environment, social conditions and corporate governance, so work with responsible management can be more challenging,” he said.

The return also varied more, and country-specific conditions affected the risk to a greater extent, he said.

However, the finance minister said the inclusion of new markets could still be considered in the future as part of framework reviews.

Tore Sanner said the ministry was proposing following up most of the changes to the GPFG’s guidelines for observation and exclusion of companies that had been put forward by the committee appointed in 2019 to assess the fund’s ethical framework, as well as some adjustments to its mandate.

“In line with the committee’s proposal, we propose introducing a new exclusion criterion for the sale of weapons where the weapons are used to commit serious and systematic violations of humanitarian law,” he said, adding that he also agreed the use of the nuclear weapons criterion should be expanded.

The ministry was also proposing extending the corruption criterion to also include ‘other serious economic crime’, as the committee suggested, he said.

“We believe it makes sense to keep the wording of the guidelines at an overall level,” he said, explaining that this meant the criteria could also be applied to any new issue.

He described indigenous people’s rights and workers’ rights as “key areas that must be covered by the human rights criterion”.

Regarding cannabis, Tore Sanner said the government was proposing bringing in a black-listing criterion for businesses producing it for drug purposes, although he said the ethics committee had been divided on this issue.

“The government has emphasised that cannabis is a narcotic substance that is illegal to produce and sell in Norway, and that Norway has given its approval to the UN drug conventions,” he said.

And on climate-related financial risks …

Norway’s finance minister Jan Tore Sanner flagged up the government’s plans to ascertain exactly what climate change will mean for the GPFG in his presentation of the government’s annual white paper on the fund this morning.

Referring to the expert group commissioned two months ago to report on the implications of financial climate risk and climate-related investment opportunities for the sovereign wealth fund, he said the ministry would present its assessment on the topic in next year’s white paper in the spring of 2022.

“Climate is nonetheless a financial risk factor that we need to understand better,” Tore Sanner said, adding that the initiative that had now been launched by the ministry would expand knowledge about the matter.