Pension Investing: Is the tide of globalisation turning?

In the first of a series of articles, Pascal Blanqué and Amin Rajan argue that Britain’s vote to exit the EU will hit asset valuations, mainly via political contagion rather than corporate profits

Brexit is yet another headwind for global growth. Its economic impact will be felt in the UK but it could potentially morph into a wider EU problem, or even a global crisis, by reinforcing populism in the US, according to the 2016 Amundi Asset Management/CREATE-Research Survey1.

The Brexit vote has crystallised pension plans’ worst fears. It has galvanised anti-EU sentiment and created new geopolitical risks. According to the European Council of Foreign Relations, there are 34 anti-EU referendum demands in 18 countries – the ones in France and the Netherlands could be a political minefield. Brexit exemplifies the unfair advantage enjoyed in modern democracies by loud scaremongering over rational debate. It shows how nationalism has triumphed over globalism, as growth has faltered and inequalities have intensified.

After the vote, the markets nose-dived, only to recover just as fast when the Bank of England announced a fresh monetary injection and even lower interest rates. The rebound confirmed the age-old truism: markets rarely price in big political outcomes until they are faced with them.

Neither the EU nor the euro-zone is likely to disintegrate any time soon. The risks from Brexit are on a slow fuse but could potentially roil the markets, as did the Greek crises in 2011-13. On their part, pension investors face an extra layer of uncertainty, as investing continues to become a tricky tightrope walk resulting from unconventional monetary action by central banks.

Uncertainty is the new risk
In the immediate aftermath of the Brexit vote the MSCI World index plunged by 7% and European stocks by 11%. If the fall was steep, so was the rebound, once markets were reassured that central banks would be even more dovish. Complacency set in.

Our European pension plan respondents2  expect the second and third-round effects of the vote to be negative (see figure) – leading to increased market volatility, a further disconnection between market prices and their fundamentals, increased contagion susceptibility between global markets, higher funding deficits, lower investment returns, and reduced risk appetite. As one German pension plan put it: “Brexit has opened Pandora’s box. Initially it has hit the UK plans. But none of us will escape the fallout.” 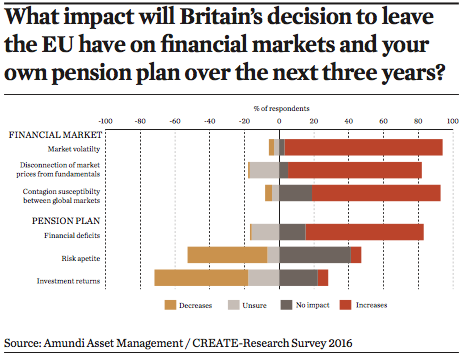 Some 55 trade treaties will need renegotiating. A protracted ugly ‘divorce’ could upset the markets and encourage other member states to leave. The eventual deal will need to be ratified by parliaments in all 27 member states, given the complexity of the EU governance.

“Markets nose-dived and soon rallied after the Brexit vote, once the Bank of England had announced a monetary stimulus. The real fallout from the vote has simply been postponed. Stock markets are too complacent about the aftermath of Brexit. We have yet to see the second and third round of its impact”

In today’s interconnected world, it has been hard enough to connect the dots on all possible risks due to the experimental policies of central banks. Brexit has added yet another layer of uncertainty for pension investors, who find it hard to distinguish an event that causes periodic volatility from the one that is a game changer.

No-one knows the end game, nor is anyone expecting a happy ending
Since the 2008 economic crisis, conventional investment wisdom has been increasingly sidelined by central bank action in the West. With the latest negative interest rates on 50-year Swiss sovereign bonds, investors are pushed to the extremities of asset price distortion. With successive rounds of QE since the 2008 crisis, diminishing return has set in. Central banks remain at panic stations.

In the meantime, global debt has ballooned from $147trn (€134trn) in 2008 to $205trn in 2015. Debt is future consumption brought forward. Its current size is unlikely to stimulate demand soon to a level that will stoke up inflation, which central banks so keenly want.

Ultra-loose monetary policies have undermined price discovery for all assets and generated countless convictionless trades. This will continue, since central banks want to avoid a recession in today’s highly indebted financial environment, where a market correction can wipe out a large chunk of the underpinning collateral. Hence, pension plans have intensified their search for better ways of investing – as we shall see in the next article in this new series.

Perspective from a pension plan

“Markets nose-dived and soon rallied after the Brexit vote, once the Bank of England had announced further monetary stimulus. The real fallout from the vote has simply been postponed. Stock markets are too complacent about the aftermath of Brexit. We have yet to see the second and third round of its impact.

“To start with, the 16% decline in sterling will push up inflation without boosting UK exports, since these are much less price sensitive. As businesses reassess their prospects, the UK may well sink into recession, especially if the prospect of trade deals proves illusory and constitutional hurdles proliferate.

“Currently, there is a cloud of uncertainty hanging over the terms of the ‘divorce’ and new trade deals. As the UK has turned migration into a ‘red line’ issue, negotiations could turn protracted and acrimonious. EU leaders are naturally keen to prevent other member states from leaving.

“The Bank of England’s timely monetary action has calmed the markets at the expense of hitting pension plans. The total deficits of UK plans in the Pension Protection Fund 7800 index fell to 78% after the Brexit vote – close to the lowest level ever recorded of 76.5% in May 2012. The number of plans in deficit rose to 4,995 after the vote, from 4,864 before the vote.

“Our own recovery period is now extended from 10 to 15 years.”

Footnotes:
1 Investing in the Post-Brexit World, available at www.create-research.co.uk
2 European survey covering 169 pension plans and conducted by CREATE-Research and Amundi