Research: Risk focus has shifted from the past to the future

In the final article on their new study, Pascal Blanque and Amin Rajan argue that tail-risk hedges have limited value since QE has changed the nature of risk

So devastating has the 2008 crisis been that its enduring legacy is most evident in the risk tools now being used by pension plans. In its immediate aftermath, the focus was on how to survive a similar fat-tail event: liquidity won over fundamentals, caution over opportunism.

However, with the onset of financial repression, the nature of risk has been changing. Rising debt worldwide is one factor. But there are others as well. They include a possible hard landing in China as its government struggles to artificially prop up the local markets; over-crowded trades in the West, as investors are obliged to go into overvalued risky assets; a shortage of liquidity in secondary bond markets, as banks withdraw from proprietary trading; and potential policy errors on the part of central banks, as they navigate their QE journey into the unknown.

With the asset price explosion, convictionless trades abound while equities, bonds and alternatives are artificially inflated. Excess liquidity has seeped into cracks that we know nothing about. For all we know, risk is quite possibly being stacked up like a house of cards. As a result, pension plans are adopting a pragmatic approach. According to our survey, more than one in every four of them has adopted the following in this period of ultra-low yield (see figure): greater asset class diversification (63%); risk factor investing (50%); duration management (43%); LDI (36%); and inflation and/or interest rate swaps (26%).

Notably, despite worries about fat-tail risks, only 14% of respondents rely on tail-risk hedges now. This is because while trying to avoid a repeat of 2008, they could potentially end up doing more harm than good (see case study). More importantly, it reflects two shifts in the area of risk management in the wake of the catastrophic losses in 2008.

First, risk management is no longer seen to be about creating firewalls around trading positions via stop-loss mechanisms and options contracts. Instead, it is about having investment behaviours that anticipate an array of possible bad outcomes and the specific factors that can cause them, and then sizing up the trade positions in the belief that some of the negative outcomes may occur. As a result, the emphasis is on smaller positions backed by dynamic investing to minimise losses and maximise gains. 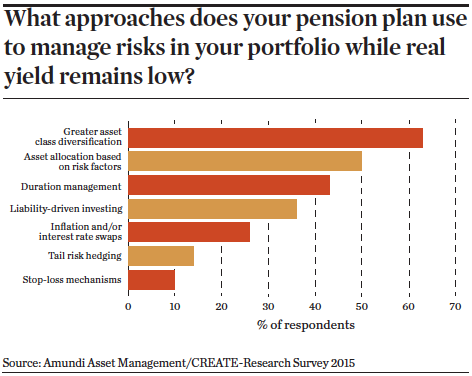 Intelligent diversification and duration management are the key tools being used. They also allow for dynamic switching within and between asset classes in the event of a large drawdown. Within that approach, asset allocation based on risk factors is gaining traction. It allocates assets by risk factors, not asset classes. It embeds risk management into portfolio construction at the outset.

The second shift is just as decisive, if not more so. The old backward-looking approach that aims to avoid the recent bad outcomes – like the 2008 crisis – is being augmented by a forward-looking approach that seeks to anticipate the next crisis in light of the new factors since then. The aim is not only to ride the current market wave but also to understand the underlying dynamic that can cause major reversals. Their risk is measured by the probability of missing the targeted outcome, instead of the standard deviation of returns.

The main thrust of risk management is directed at the three most silent of portfolio killers: sequence of returns risk, arising from the time taken for a portfolio to recover after a big market spike; longevity risk, when plan members outlive their assets; and inflation risk, when rising prices erode the money value of assets and their returns.

Under financial repression, the past is no longer a good guide to the future. The biggest risk is the one we don’t yet know. Dynamic investing will prevail while QE continues to distort market valuations.

“The 2008 crisis inflicted losses of around €9trn on pension plans worldwide. It also taught us that risk models based on the notions of risk-free assets, static correlations and VaR (value at risk) were over-simplified and over-trusted. They were more a therapy than anything useful. Like sand dunes, their foundations changed with the changing winds.

fat-tail of returns. Worst of all, they failed to recognise that investors’ own reactions also introduce new risks, as do the reactions of other investors, as they weigh up each new situation in today’s surreal market environment. Naturally, tail-risk hedging has come to the fore. But the two risk tools that pension investors have been enjoined to embrace could do more harm than good.

“The first tool is the stop-loss mechanism – a protocol that mandates the liquidation of a stock position once the preset loss threshold is breached. But this simplicity comes at a price; the trade is done on the basis of incomplete information, creating a false sense of security.

“For example, on 6 May 2010, the Dow index plummeted 573 points in a matter of minutes, only to recover most of that loss just as quickly.  Interpreting it as a ‘risk-off’ signal, numerous stop-outs were wrongly activated.

“The second tool that we have considered to prevent large 2008-type losses relies on options contracts. These are based on asymmetric bets with limited downside and unlimited upside. However, asymmetries that are visible at the level of an individual option position begin to weaken as the number of positions increases. Besides, options are not so liquid and cost more than the underlying securities.

Our best bet is to put all our biases to one side and expect anything and everything. As a result, we have adopted a two-pronged approach to managing tail risks: broader diversification based on small positions; and dynamic investing that enables us to liquidate our positions as new information emerges.”

Pascal Blanqué is CIO of Amundi Asset Management and Amin Rajan is CEO of CREATE-Research
*How pension plans are responding to financial repression. Available at amin.rajan@create-research.co.uk