Bill Gross, founder and previously CIO at PIMCO, the biggest bond manager in the world, with more than €1.97trn in assets under management, has left the company to join equities specialist Janus Capital Management.

Douglas Hodge, chief executive at PIMCO, said: “While we are grateful for everything Bill contributed to building our firm and delivering value to PIMCO’s clients, over the course of this year, it became increasingly clear the firm’s leadership and Bill have fundamental differences about how to take PIMCO forward.”

The firm has a succession plan in place, and its management board, made up of its managing directors, will confirm shortly the election of a new CIO.

Relevant portfolio management assignments will also be announced at that time.

Meanwhile, shares in Janus Capital Group soared by more than 30% on the New York Stock Exchange after the news was announced on Friday.

Gross managed well over $200bn in PIMCO’s Total Return Bond fund, and the reaction from bond markets overshadowed the response to news on the US GDP growth rate released an hour earlier. 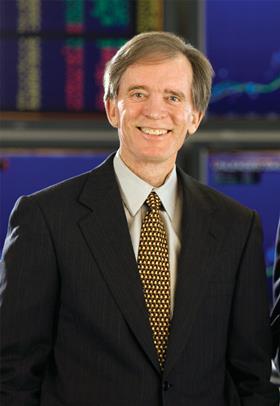 Trading volumes in the exchange-traded fund based on the Total Return fund (BOND), which manages less than $4bn, spiked as the equity market opened in New York, the time of Janus Capital’s news release.

Bond market selling was enough to break a down trend in Treasury yields from the previous few days, pushing the 10-year yield up by 3 basis points on the day, to a high of 2.55% within 40 minutes.

A spokesperson from a European asset manager said uncertainty about the holdings of the PIMCO fund in an environment of tight bond market liquidity was driving market particpants’ concerns.

Gross will start at Janus on 29 September and on 6 October takes the reins of the recently launched Janus Global Unconstrained Bond Fund and its related offshore fund, to be launched soon.

Based in a new Janus office to be set up in Newport Beach, California, Gross will be responsible for bringing the company’s global macro fixed income strategies to fruition.

This will be separate but complementary to Janus’s existing credit-based fixed income platform, which has been built up under Gibson Smith, the company’s fixed income CIO.

Richard Weil, chief executive at Janus Capital Group, said: “Bill Gross has an exemplary capital record with decades of success, and he will offer an exceptional approach to navigating today’s increasingly risky markets with a focus on macro, unconstrained strategies.

“His involvement provides Janus with a unique opportunity to offer strategies and products that are highly complementary to those already managed by our credit-based fixed income team.”

Gross said: “I look forward to returning my full focus to the fixed income markets and investing, giving up many of the complexities that go with managing a large, complicated organisation.

“I chose Janus as my next home because of my long-standing relationship with, and respect for, CEO Dick Weil and my desire to get back to spending the bulk of my day managing client assets.”

Guy Foster, head of research at Brewin Dolphin, said investors should not be concerned with the ability of the Total Return Fund – which Gross ran – to manage large withdrawals as a result of this announcement.

He said: “Some 60% of the Total Return Fund’s holdings are US government or agency securities. Treasury yields rose 5bps, but the news coincided with US Q2 GDP release (basically in line), which might have eclipsed even the great man’s career change.”

But he added: “We feel, however, that there is a risk of large withdrawals in PIMCO’s other less liquid mandates, and it is difficult to judge at the moment how the market is going to cope with these. We aren’t yet seeing any meaningful reaction in credit, which is where the biggest risk would lie.”

Foster said: “The obvious succession would be for Mohammed El Erian to resume his CEO and co-CIO roles, but Bloomberg reports that PIMCO are denying El Erian will return.

“Perhaps pre-emptively, El Erian had revealed this week that work/life balance had been the reason he left PIMCO, rather than the much-covered souring of his relationship with Bill Gross.”

Darius McDermott, managing director at FundCalibre, said: “This is a seismic event for the fund management industry globally. Despite some performance issues in the last few years, Gross has arguably been the best global bond manager in history.”

He added: “This shock development is interesting for fixed income teams around the globe, as groups will attempt to capture some of the outflows from PIMCO. While this is clearly a stunning addition to the Janus fixed income team, for PIMCO, it can only be looked upon as a major loss.”