The perils and promise of financial repression

In this first article in a series on a new survey, Pascal Blanqué and Amin Rajan argue that quantitative easing leaves pension plans at the wrong end of an arbitrary redistribution of wealth

Global debt has increased from $142trn (€102trn) in 2008 to an all-time high of $199trn in 2014. A stylised public sector balance sheet shows that most developed economies are effectively insolvent – such is the weight of their current debt overhang.

This has sparked a balance sheet recession, catching indebted nations into a vicious cycle of rising debt, misallocation of capital and sub-par economic growth.

Attempts to reduce the debt via economic growth, reform of public finances and outright austerity have proved ineffective – especially in the euro-zone and Japan. Additionally, price pressures are wilting as ageing demographics are delivering slower growth, stagnant productivity and rising welfare expenditure.

Indeed, looking back in history, UK public debt as a proportion of GDP was 245% in 1945. In the ensuing years, it was effectively reduced at the rate of 4% of GDP per year by artificially low real yields in a climate of growth. The US also managed to reduce its debt by 2% of GDP per year after the Second World War.

However, since the 2008 crisis, growth in the West has been sluggish, defaults unpalatable and reforms slow. This has led to the revival of a long-forgotten phenomenon: financial repression that relies on a mix of low interest rates to make the debt more manageable and rising inflation to erode it over time.

As an unintended effect, the resulting low real yield transfers wealth from savers to borrowers. Its main tool has been quantitative easing (QE). As long-term investors, pension plans are especially vulnerable to this arbitrary redistribution, according to the 2015 Amundi Asset Management/CREATE Research Survey*.

After the 2008 crisis, the first to embark on this path was the US Federal Reserve via its ambitious bond purchase programme, followed by the Bank of England, the Bank of Japan, the Swiss National Bank and lately the European Central Bank. With the ECB buying bonds at a rate of €60bn a month until September 2016, negative yields prevailed over 20% of sovereign debt in Europe over the summer of 2015.

A palliative, not a cure

By its nature, financial repression has relied on QE, which has so far involved the outright purchases of bonds by central banks and zero-bound policy rates. Together, they aim to drive investors into risky assets so as to generate an economic boost by making investors more wealthy. Historically, this twin-track approach has taken an average of 25 years to work. However, that does not detract from the benefits of the current round that started in 2009 after the crippling credit crisis in 2008, as identified by our survey. From the perspective of pension plans, it has provided two key benefits (see figure 1):

Elsewhere in the report, other benefits have been reported too. In particular, QE has:

• Averted a global depression (57%)
• Given governments time to implement the necessary reforms (49%)
• Eased the debt burden on governments, companies and households (41%).

Unsurprisingly, only 22% of our respondents says that it has kick-started growth in global economy. That is because the main benefits of financial repression have been felt mostly in the US, which was the first country to engage in a full round of such unconventional monetary policy. 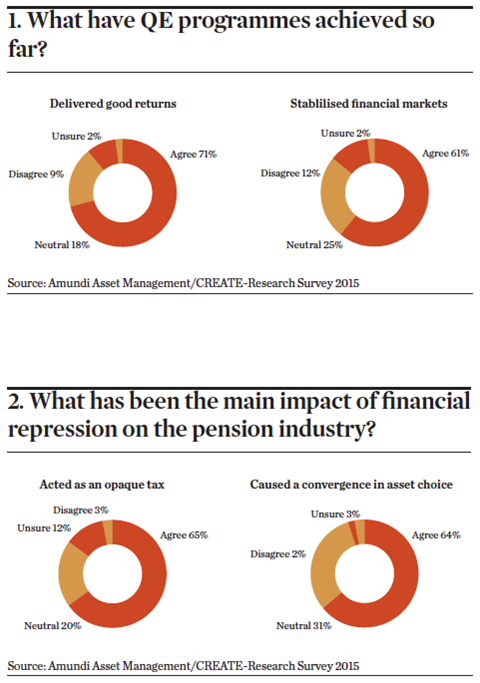 In comparison, the QE programme of the ECB is only six months old and its benefits have yet to become apparent. In Europe, debt has been a huge drag on growth and employment. Even so, for policy makers everywhere, these programmes have been the least-bad option, while reforms to public finances or debt restructuring have proved politically unpalatable.

Even before the crisis, demographic trends in the West were having dramatic effects on healthcare, welfare budgets, labour markets and national competitiveness. The crisis diverted policy attention from the important to the urgent. In the meantime, ultra-low yields have forced investors into riskier assets that they would not have chosen in normal times, according to our survey.

That QE has delivered tangible benefits is not in doubt, but these have come at a price (figure 2). Since 2009, it has:

• Acted as an opaque tax on investors (65%);
• Forced an artificial convergence in the asset allocation of pension plans (64%).

Elsewhere in the report, other negatives have been reported too. Specifically, it has:

• Increased the volatility of capital flows into emerging markets (64%);
• Allowed global debt to grow inexorably (62%);
• Permitted governments to backslide on essential reforms (56%);
• Sown the seeds of the next financial crisis (55%).

Reputational herding is more common than ever and means that the asset allocation decisions of pension plans are converging. Fear of relative under-performance is inducing them to herd around average returns. The resulting crowded trades have fuelled the markets in the upswing but can potentially cause havoc in a downswing.

“Unwinding QE will not be easy, as recent prevarications by the Fed show all too clearly. It left investors in a state of hypnotic paralysis”

A sustainable recovery that can stoke inflation via excess demand has proved elusive in all the developed economies. Even in the US, where recovery is more evident, there are doubts as to whether the economy has reached escape velocity, which would allow it to cut loose from its recession mindset. Despite recovery in its labour markets, inflationary expectations have not moved the needle.

The US example also shows that the longer such unconventional monetary policy remains in place, the harder the exit phase becomes. Unwinding QE will not be easy, as recent prevarications by the Fed show all too clearly. It left investors in a state of hypnotic paralysis. Errors in monetary policy remain a key risk factor for markets that have placed huge trust in central banks. With many moving parts, policy errors are inevitable. 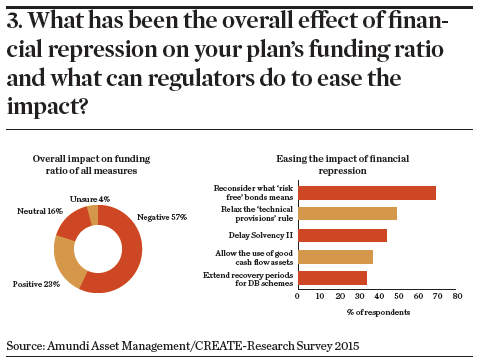 As we saw above, financial repression is hurting the pension industry as an unintended consequence. The implied collateral damage is hard to quantify. It is manifested by the impact on pension funding ratios (figure 3): 23% believe it to be positive against 57% who do not. When broken down by asset class:

The key impact has been felt on the liability side by a headlong drop in discount rates. With the ECB now buying bonds at the rate of €60bn a month until September 2016, negative yields now prevail over 20% of sovereign debt in Europe. As a result, for example, falling German rates have caused a significant rise in the pension deficits of its DB plans. The fall in the AA-corporate rate from 2.7% to 1.3% hiked up current liabilities by a third in 2014 alone.

Across Europe, the median discount rate has fallen from 4.5% to 3.6% this year. A 1% fall in the discount rate would increase average liabilities by 16%, undermining the viability of sponsor covenant; especially since the pension deficits of European private sector employers expressed as a percentage of their total debt has increased from 27% in 2009 to 40% in 2014.

Unsurprisingly, 70% of pension plans want their regulators to reconsider what the ‘risk-free’ rate means (figure 3, right chart). As used on the assets and the liability sides of the funding ratio, such a rate is a misnomer and forces pension plans to act in ways contrary to their best interests.

There are no risk-free bonds in the widely accepted sense. By definition, such an asset is meant to exhibit three features: the lowest returns in the investment pecking order, zero correlation with risky assets and zero difference between its expected and its actual returns. In practice, that has not been the case for a long while. For example, from 1999 to 2009, US 10-year Treasury bonds not only outperformed risky assets such as equities, their actual returns also well exceeded their expected ones. In 2014, the 10-year German Bund returned 40%.

In fact, sovereign bonds have defied every tenet of conventional wisdom over the past thirty years. Yet the whole edifice that underpins the calculation of funding ratio has been turned upside down by financial repression. It remains based on the idea of a risk-free asset that no longer prevails. Everything is reduced to guesswork. That is no basis for pension planning. With a single large dominant buyer, bond markets have ceased to function normally. The notion of equity risk premium is also sidelined by artificially low interest rates.

In this age of financial repression, investment wisdom is not the only thing that is sidelined. Macro-economic tools – like interest rates and devaluation – also have radically different policy meanings. It is hard to make rational decisions in what is a very irrational world, when the old rules of thumb no longer apply. Markets have become very complex. Today, trying to figure out what triggered a move is like asking which snowflake caused the avalanche.

*How Pension Plans are Responding to Financial Repression. Available from amin.rajan@create-research.co.uk