DC consolidation could come at expense of members, experts warn

The ongoing consolidation of UK master trusts could lead to “big bland vanilla products” for members, flying in the face of the government’s aim for the best and most effective schemes to survive authorisation at the start of October, industry experts have warned.

The sector faces a shake-up in advance of the need for master trusts – multi-employer defined contribution (DC) schemes – to seek authorisation from the Pensions Regulator (TPR) from 1 October 2018.

The UK’s Department for Work and Pensions (DWP) estimates that as many as 17 schemes might not seek TPR approval.

While the process of mergers and acquisitions might be broadly positive for larger schemes, keen to achieve economies of scale, experts have warned that members’ interests might be left behind.

“The downside of consolidation is that the market becomes so bland and low cost that the products being provided to members end up not being any good,” said Sarah Smart, chair of the trustee board at TPT Retirement Solutions. “That it’s only big bland vanilla products that members get – and that’s not what the intention was at all.

“The intention was to enable the economies of scale to happen and allow the market to be broad enough to be able to distinguish between [the individual schemes].”

The DWP has estimated that the number of master trusts could fall over the next few months from the 81 registered by TPR in January to 56 post-authorisation. 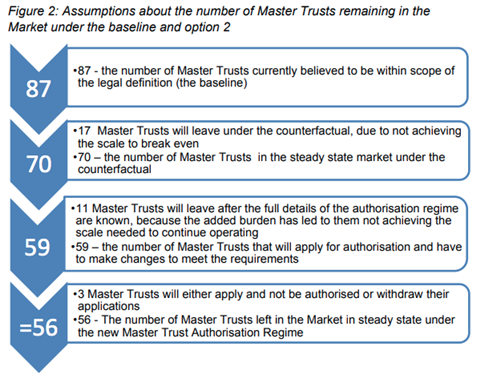 Source: Department for Work and Pensions

How the DWP sees the UK master trust market developing

Membership of master trusts has grown by 42% over the past year to almost 10m members, according to data from TPR. Assets have doubled since 2010 to more than £10bn (€11.4bn).

Over the past few years, several smaller schemes have been acquired by larger providers.

Last month, Salvus Master Trust boosted its assets to more than £100m through consolidation with the £7m Complete Master Trust.

In 2016, the trustees of My Workplace Pension moved the scheme’s assets to Smart Pension, and BlueSky Pensions UK swooped on the separate Wessex Pension and Pensions Umbrella trusts.

Master trusts have grown in popularity following the launch of auto-enrolment for all UK employees. In effect, each master trust acts as an umbrella structure for many different occupational DC schemes, with each employer gaining its own division within the overall plan.

As there is only one overall trustee board, responsibilities such as governance are ceded to the master arrangement.

“With the rapid growth in the master trust sector as a result of automatic enrolment, the Pensions Regulator’s new authorisation regime is essential to safeguard savers,” said Tim Gosling, DC policy lead at the Pensions and Lifetime Savings Association, the UK trade body.

“The requirements for authorisation have been created to challenge the sector and there will likely be consolidation of the market as a result. Some schemes are looking to grow by acquisition and we anticipate that these ones will take most schemes wishing to exit the market.”

However, Gosling said there were “residual concerns” over the possibility of a small number of schemes exiting the market “in difficulty”.

“We anticipate that TPR will be monitoring these schemes closely in the run up to 1 October,” he added.

A spokesperson for TPR said there was no target as such for the number of schemes that should be in the market.

“Inevitably there will be some market consolidation as some schemes will chose not to or be unable to meet those standards and wind-up, so the number of master trusts schemes operating in the market will reduce,” the spokesperson said.

“We have already seen some schemes leave the market and we expect that more will go.”