UK FTSE 350 companies significantly increased dividend payments over the previous six years, but failed to match these with deficit reduction payments to defined benefit (DB) pension schemes, according to the regulator.

The Pensions Regulator (TPR) said that the ratio of deficit repair contributions to dividends declined from around 10% to 7% between 2011 and 2016.

This was mainly due to a significant increase in dividends over the period, without a similar increase in contributions, it added.

“We are not against companies paying out dividends but employers must strike the right balance between the interests of the scheme and of its shareholders,” he said.

TPR last month published its annual report on DB scheme funding, calling on dividend-paying companies to ensure a balance between cash paid to shareholders and contributions to pension schemes. 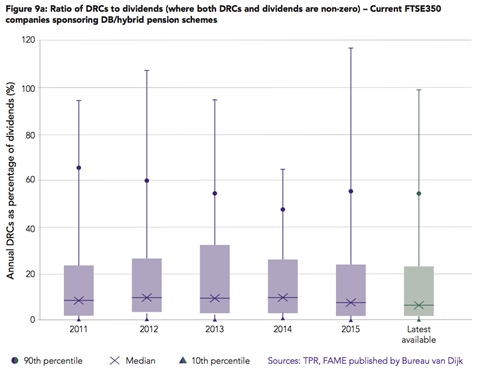 TPR said the data it released yesterday provided context to the expectations it set as part of its annual funding statement (AFS), and Warwick-Thompson confirmed the regulator’s intent.

“Having made our expectations so clear in this year’s AFS, if we see a situation where we believe a scheme is not being treated fairly, we are likely to intervene,” he said. “For example, if a company is paying out more in dividends than in deficit reduction contributions, we will expect to see a short recovery plan. And we will expect that recovery plan to be underpinned by an appropriate investment strategy.”

The analysis released yesterday related to DB schemes carrying out valuations between 22 September 2016 and 21 September 2017.

TPR said the vast majority of schemes remained affordable, but many should do more to tackle increased benefits.

For 37% of schemes TPR considered the employer covenant adequate to support the scheme, but said the current contribution and/or risk strategies posed unnecessary longer-term risks.

These could be mitigated by an increased pace of funding, in some cases combined with a reduction in the level of risk, it added.

Darren Redmayne, chief executive of Lincoln Pensions, said it was concerning, but not surprising, that TPR viewed nearly four in 10 schemes as taking unnecessary longer-term risks.

“To date the industry has focused too much on current scheme deficits and not enough on the risks being run, which can result in further deficits emerging,” he said.

Redmayne added that TPR had fired “a warning salvo” regarding the balance between dividends and deficit contributions.

“We expect some corporate dividend decisions will come back to bite their directors and shareholders in the coming years,” he said.