“This is a great achievement for fund managers, advisers and trustees, who are now firmly taking control of their schemes’ futures, not leaving it to chance.”

The vast majority of new mandates came from smaller defined benefit (DB) pension schemes, according to XPS. It attributed this in part to the growth of investment platforms and fiduciary management.

Directly accessed pooled funds were the single biggest contributor to the growth in mandate numbers, according to the consultancy. It said that 92% of the new mandates in 2018 were from pooled solutions, up from 87% in 2017.

Tim Miller, consultant at XPS, said: “73% of all LDI mandates are now in pooled LDI solutions, highlighting the efforts made by managers and advisers to bring accessible LDI solutions to all schemes.” 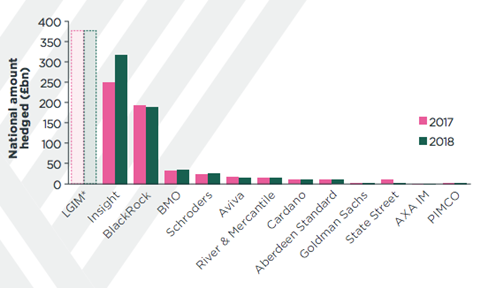 The consultancy estimated that over half (54%) of UK pension schemes’ liabilities were now hedged with LDI. This was based on estimating that the UK private sector had a total DB pension scheme liability of around £1.9trn and discount rates of gilts plus 0.5% per annum.

However, it also said the actual level of hedging was probably higher as the 54% excluded hedging achieved through holding bond assets outside a specific LDI hedging programme.

BMO Global Asset Management added 93 new mandates in 2018 and now had the largest number of mandates, although the manager was still fourth largest by the notional value of liabilities hedged, according to XPS.

The consultancy noted that Insight Investment had “also made some significant additions over the year”. It had taken on 30 new mandates to hedge an additional £67bn of notional liabilities.