The €31.5bn Rabobank pension fund has implemented a new, sustainable benchmark for all its equity investments. Firms with an ESG rating of BBB and lower, including Alibaba, have been excluded.

Rabobank, which has a passive investment style, is not the first Dutch pension fund to implement a sustainable equity benchmark.

However, such a move is usually limited to developed market equities as sustainability data for emerging market companies are often deemed unreliable.

Previously, Rabobank had invested its EM equity portfolio in four actively managed funds. These have now been replaced with two other managers with each managing a passive mixed mandate of both developed market and EM equities.

Rabobank pension fund’s equity portfolio totals €8.8bn, 20% of which is invested in EM.

The fund designed the new benchmark in house with the help of its fiduciary manager Achmea Investment Management, using the FTSE Russell All Country World Index as a basis.

This index has about 3,000 constituent firms, 20% of which are located in EM. “We used FTSE Russell’s ESG scores to design our sustainable index, but before applying this filter we first excluded state-owned enterprises (SOEs) from countries in our exclusion list, including Russia and Saudi Arabia,” said Karin Merkus, the fund’s CIO.

The pension fund considers a company a SOE if a government controls more than 50% of a firm’s shares.

Rabobank pension fund may exclude SOEs from more countries, including China, in the future, she added. “We currently follow the country policy of Rabobank when it comes to exclusions, but in the future we want to increasingly make our own decisions.”

The adoption of a sustainable benchmark is part of the Rabobank scheme’s drive to reduce carbon emissions of its equity portfolio by 50% in 2022 compared to 2019.

The fund has also selected four Sustainable Development Goals (2, 7, 12 & 13) to concentrate its engagement efforts on. 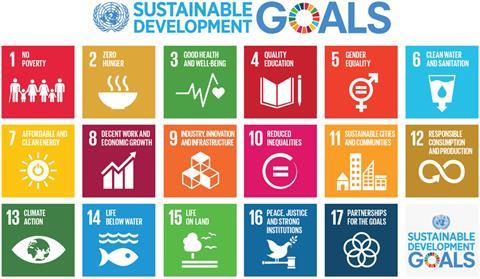 The fund has selected four Sustainable Development Goals (2, 7, 12 & 13) to concentrate its engagement efforts on

The new sustainable index has about 1,600 companies, slightly more than half of the original index. Since the excluded firms tend to be relatively small, they account for about 25% of the market capitalisation.

Not all of the excluded firms are relative small fish, however. The Chinese internet giant Alibaba, which until recently was the largest EM company in terms of market capitalisation, is also on the exclusion list.

“This company has a score of 1.4 on a five-point scale,” Merkus said. “This means the firm is among the 15% of firms with the lowest score in the retail sector, and as a result it’s not part of the index. Alibaba has so far failed to set social and environmental standards for its suppliers.”

The fund’s accountability body voiced doubts earlier this year on whether the pension fund had sufficient capacity to create and maintain a bespoke benchmark.

“To keep an index up to date is technically quite easy,” according to Merkus. “But we went to great lengths to make sure we chose a workable format. For example, we had long discussions about the cut-off point, at a BB or a BBB rating. In the end, we went for BB because otherwise too many companies would have been excluded to retain our predetermined maximum tracking error of 2% compared to the original index.”

Additionally, Rabobank has outsourced the management of its new index to FTSE Russell.

“We developed the benchmark in house, but to maintain the index we need an external provider which for example collects changes in ESG ratings and rebalances the index from time to time,” Merkus said.