Norway is removing a restriction in the mandate for its giant sovereign wealth fund that will allow it to make full use of the 2% allocation to unlisted renewable infrastructure investments granted two years ago – effectively doubling its scope for such assets to NOK240bn (€24.8bn) from NOK120bn now.

However, so far, the NOK11.6trn Government Pension Fund Global (GPFG) has only made one investment in unlisted renewable infrastructure, having bought a 50% stake in a Dutch offshore wind farm a year ago for €1.37bn.

The 140-page 2021 report on the SWF includes several other key changes and decisions the government has made on the running of the funds, such as a strengthening of the GPFG’s climate risk efforts involving a directive to base efforts on the goal of Paris-alignment at the companies it owns, and the decision that the larger fund should continue to be managed with a certain element of active management, but without increasing its permitted tracking error.

Trygve Slagsvold Vedum, minister of finance, said: “The white paper we are publishing today contributes to transparency in the management of the fund and broad endorsement of key choices.”

The ministry said government would strengthen efforts on climate risk in the GPFG, proposing a series of changes that it said were largely in line with the recommendations in the expert report on climate risk and the fund published last August.

One of the government’s proposals on climate is that responsible investment efforts will be “based on a long-term goal that the companies the fund is invested in align their activities in a way consistent with global net zero emissions in accordance with the Paris Agreement”. 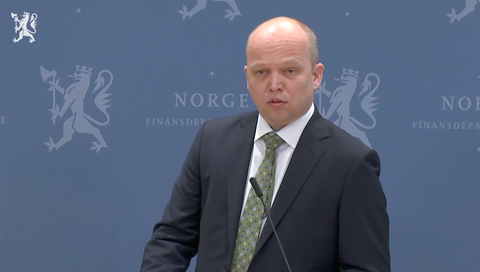 Other proposals are that Norges Bank – which runs the GPFG via its Norges Bank Investment Management (NBIM) unit – should set out principles for managing and measuring climate risk, and that the portfolio should be stress tested, including a scenario in accordance with global warming limited to 1.5°C.

It also announced more scope for unlisted renewable infrastructure, saying that since “a more ambitious climate risk management and reporting arrangement” was now being established for the fund as a whole, it proposes removing the management mandate requirement for Norges Bank to establish specific environmental investment mandates.

Since it was the NOK120bn cap on the size of these mandates that was restricting the GPFG from using the whole of the 2% allocation to the new asset class that it had been granted in 2019, this move increases the scope for unlisted infrastructure.

“This implies, in somewhat simplified terms, that the cap on such investments is increased from NOK120bn to about NOK240bn, based on the market value of the fund at the beginning of this year,” the Ministry of Finance said.

The ministry also included a review of Norges Bank’s management of the GPFG in the new report, saying it had received analyses and assessments from both an expert group as well as the bank.

An issue that has come up in these papers has been active management and the leeway the fund has and should have for deviations from its benchmark index.

With NBIM having generated excess net returns for the GPFG of NOK170bn from 1998 to 2021 through active management, the ministry said its overall assessment was “that investment management has been satisfactory and that the GPFG should continue to be managed with a certain element of active management”.

“The Ministry agrees with Norges Bank’s assessment that the scope for deviations from the benchmark index is sufficient, and is proposing to keep this unchanged,” it said.