Last year marked the first time since 2014 that the industry did not cross the 200 and $100bn thresholds for fund closes and fundraising volumes, according to Preqin.

There were 830 private debt-backed deals with an aggregate value of $48bn in 2019, marking the end of a steady rise in the number of deals and aggregate deal value since 2009. 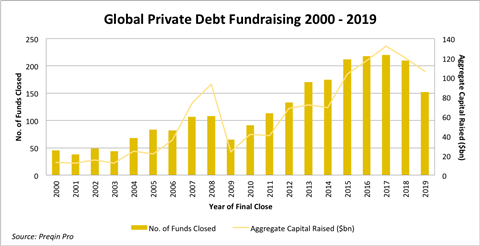 Dry powder fell from a peak of $292bn at the end of 2018 to $261bn as of December 2019. This marks the first time the cash pile shrank since 2014 as fund managers deployed capital at a faster pace than they raised it during the year.

However, new funds continue to be launched and the marketplace is more crowded than it has been since 2017, according to Preqin’s data. 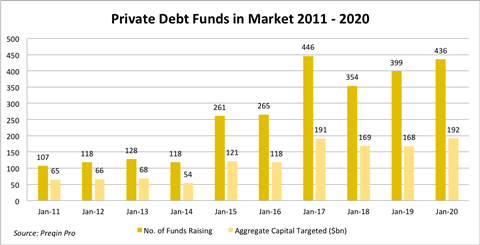 “Suggestions that the [private debt] market has reached saturation are not fully substantiated, but many investors do seem to be holding off on making commitments, and fundraising has seen its largest ever year-on-year decline,” said Tom Carr, head of private debt at Preqin.

“But long-term appetite among investors remains robust, and fund managers certainly believe that there is significant potential yet to be tapped. They will point to declining dry powder as an indication that they are still able to put capital to work, and this may prompt investors to start making commitments again and boosting 2020 fundraising activity.”

Creditshelf will originate unsecured SME loans between €500,000 and €5m with a term of five to eight year for BNPP AM’s institutional investor clients. The asset manager will make the final credit decision on the loans.

Stéphane Blanchoz, head of BNPP AM’s SME alternative financing business, said: “Our partnership with creditshelf will allow us to bring our unique SME loan product to the German market, alongside our existing offering in the UK and the Netherlands.”

Banks in Germany do not typically offer terms of five to eight years for unsecured growth financing, noted Daniel Bartsch, founding partner and board member of creditshelf.

BNPP AM’s SME alternative financing platform is part of the asset manager’s private debt and real assets investment group. It already has strategic partnerships with origination platforms CODE Investing and Caple; it has a 10% stake in the latter.