An unnamed “large” UK pension scheme has transferred the longevity risk associated with £6bn of pensioner liabilities via a reinsurance deal with the international reinsurance business of The Prudential Insurance Company of America, a wholly owned subsidiary of Prudential Financial Inc. (PFI).

The transaction closed last month and used an independent UK-regulated insurer, Zurich Assurance, as intermediary. The transaction used a “pass-through” structure, meaning the longevity and default risks are able to be passed through to the insurer.

According to advisers Willis Towers Watson and CMS, this was the first time PFI had transacted through a structure of this kind.

Willis Towers Watson and CMS acted for the trustees and as lead advisers to a joint working group of the pension scheme.

“We helped the Joint Working Group to understand the full breadth of available options for managing longevity risk, which was a material outstanding risk in the scheme,” said Ian Aley, head of transactions at Willis Towers Watson.

“We concluded that a longevity swap would provide good value for money relative to the risk transferred, as well as enabling the scheme to continue to run an optimised investment strategy.”

The £6bn transaction is PFI’s third largest UK longevity risk transfer transaction to date, and the first to use a pass-through structure. Other transactions have used different intermediary insurers, such as a Guernsey captive unit and a Bermudan captive insurer.

Dave Lang, vice president, international reinsurance transactions and PFI’s transaction lead on the deal, said: “We are all now experienced in providing trustees with pension de-risking options using an offshore captive or an onshore UK-regulated intermediary insurer to host the longevity reinsurance transaction, which creates the needed flexibility for clients looking to de-risk.”

Greg Wenzerul, head of longevity risk transfer at Zurich Assurance, said there were many benefits for a UK trustee in using a regulated UK insurance company for longevity risk insurance in this capacity, including cost certainty for the life of the transaction.

Last year was a record year for the UK risk settlement market, with over £55bn of bulk annuities and longevity swaps priced. More than £24bn of longevity swaps were closed, according to public deal announcements.

The £6bn deal for the unnamed UK pension scheme follows a £3bn longevity swap for AXA UK Pension Scheme, which was unusual because it covered a material number of deferred members.

Last year PFI launched a funded reinsurance offering, where it insures both longevity and asset risk for clients. 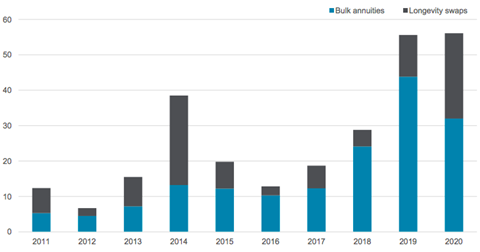 Source: Aon, based on Aon transactions and publicly announced deals