The UK’s trade body for pension funds has laid out an ambitious and detailed plan for an overhaul of the country’s defined benefit (DB) system aimed at improving prospects for the weakest schemes.

The Pensions and Lifetime Savings Association’s (PLSA) DB Taskforce today set out how regulators and government could facilitate significant consolidation and simplification to reduce costs and reduce the number of schemes that would fall into the Pension Protection Fund (PPF). Its report cited the successful consolidation projects that have taken place in the Netherlands and Australia in recent years.

Ashok Gupta, chair of the DB Taskforce, said in his introduction to the taskforce’s report: “Millions of people’s retirement incomes are now at risk with approximately 3m people in DB schemes having only a 50% chance of seeing their benefits paid in full, despite the fact that employers are paying out billions each year in deficit recovery contributions (DRCs).

“Indeed, for some employers the cost and uncertainty of these DRCs will further jeopardise their future, diverting money away from crucial investment in developing their businesses and improving the productivity of their workforce.”

He added: “Time is running out for a solution to the challenges DB schemes face, and it is more vital than ever that industry and policymakers work together to protect the millions of people whose retirement savings are at risk.”

The PLSA reiterated its previous calls for consolidation to be facilitated through so-called “superfunds”.

The taskforce’s report claimed there was “potential to create superfunds which can provide members with 100% of benefits”. Previous research from the taskforce had indicated that schemes with the weakest level of employer covenant had only a 32% chance of paying benefits in full.

It proposed creating funds backed by commercial sponsors, and suggested there were multiple ways for making such vehicles attractive to capital providers, including promising a share of any funding surplus generated by the scheme.

The taskforce said its proposals would require adjustments to existing rules rather than “wholesale change to regulation”.

The report stated: “The duty upon trustees to make decisions in members’ best interests means that they would only agree to transfer to a superfund if they were confident it would provide a better outcome for members over and above the other options available… We believe that this would provide sufficient protection for members.”

The PLSA also proposed the introduction of a DB Chair’s Letter, to be published annually and sent to the regulator and members, detailing how the trustees were acting in members’ best interests and, crucially, explaining the trustee board’s consideration of consolidation. 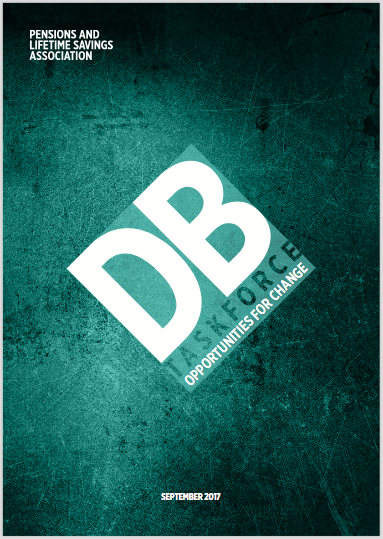 Research commissioned by the PLSA found that 65% of employers supported the “principle of consolidation”. In particular, employers supported shared administration (72%), shared external advisers (66%), and pooling assets under one asset manager (54%), as is underway within the local government pension scheme.

One of the biggest challenges to consolidation among UK pension funds is the huge variation in scheme rules and benefit structures. Even within schemes sponsored by the same employer there can be several types of benefit resulting from merger activity or other changes made by the trustees.

However, the PLSA’s taskforce maintained it was possible to amend existing legislation to allow trustees to “modify” their schemes as long as members had equivalent benefits after the modifications were applied.

The taskforce’s report advocated the creation of a “white-list regime”, setting out a number of requirements trustees would have to meet in order to simplify or “harmonise” benefits.

“The schemes run by employers in traditional industries, such as manufacturing or bricks-and-mortar retail, were established at a time when firms in these sectors were thriving. The changing landscape of UK industry means that this is no longer the case today, and DB schemes are now disproportionately concentrated in sectors which are no longer as robust as they once were .”

“The taskforce… estimated that the total annual cost savings for schemes merging [services, governance and asset management] would be in the region of £1.2bn per annum . These savings, while beneficial, will not address the £400bn shortfall in DB funding .”

“The large number of small schemes in the UK DB system means that schemes may struggle to fix the problem of underfunding and deal with the issue of a weaker covenant by themselves.”

“We do not pretend to think benefit simplification is an easy or cost-free exercise . But in our view it is worth undertaking, because rationalising benefits in individual schemes and across the sector will have many short- and long-term benefits.”

“We estimate that benefit simplification could reduce the cost of administration services by over 50% .”

“We believe employers would pay more [to a superfund] if as a result they could be released from future liability for the scheme.”