The UK’s defined benefit sector has the weakest funding position in Europe, according to research by MSCI.

The index company used reported pension scheme funding data to calculate the ratio of underfunded pension liabilities as a percentage of annual company revenues, indicating not only pension shortfalls but also sponsoring employers’ ability to fund them.

The UK’s average of a 7.8% “underfunded ratio” across 103 companies was the worst in Europe and the second worst globally, beaten only by the US.

Germany, Luxembourg and Belgium also had ratios above 7%, although the latter two were based on far smaller sample sizes.

Agnes Grunfeld, vice-president at MSCI and author of the research, wrote: “Our findings confirmed at least some of the short-term concerns over a widening gap between pension obligations and funds set aside to meet those obligations.”

UK pension deficits have spiralled following the country’s vote in June to exit the European Union.

At the end of October, the combined defined benefit fund shortfall was £328.9bn (€385bn), according to the Pension Protection Fund.

In addition to breaking down the company results by country, MSCI also looked into results for each industry.

Among 1,457 European companies in the sample, semiconductor firms, pharmaceutical companies and banks were among the worst ranked sectors.

MSCI also “flagged” companies that ranked in the weakest 20% of their industry peer groups.

The UK had the highest proportion of its companies flagged as among the weakest – 38%. 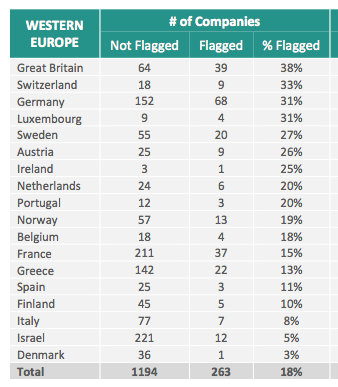 Grunfeld said: “While the overall level of underfunded pension liabilities for the 18 [European] countries in our sample is only 4.7%, on the basis of this single measure, Great Britain’s pension funding status is weaker than other European countries, having the highest percentage of companies flagged and also the highest underfunded ratio relative to revenues.”

A report published last month by Pension Insurance Corporation and Llewellyn Consulting estimated that deficits for FTSE 100 company pension schemes were depressing share prices by as much as £340bn.

MSCI’s report can be downloaded here.