BT is set to plug its £11.3bn (€12.8bn) pension scheme deficit with a £4.5bn payment spread over three years, as part of its overall recovery plan for the BT Pension Scheme (BTPS).

The UK telecoms group will pay in £2.1bn over three years to 31 March 2020 in addition to a further £2bn contribution to be funded by a bond issuance.

In addition to a further £400m transfer to the scheme for the financial year 2020-21, the overall total will be paid by 30 June 2020 when the next actuarial valuation is due.

The goal was to meet the deficit within the next 13 years, BT said. From 1 April 2020, the company will make additional annual payments of £900m into the scheme for the next 10 years.

In total, the company stands to pay more than £13bn into the scheme by 2030 – an increase of more than £5.5bn on the last recovery plan, agreed following the scheme’s 2014 valuation. 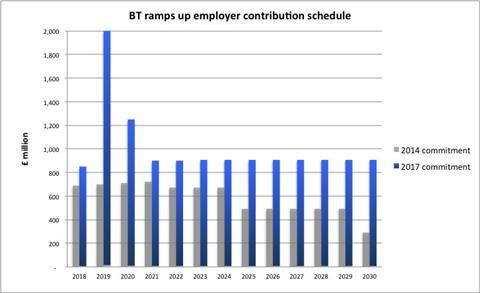 Paul Spencer, chairman of BTPS’ trustee board, said: “The substantial contributions agreed with BT in the near term, together with ongoing developments in the scheme’s investment strategy, are expected to lead to a material improvement in the stability of the scheme’s funding position.”

The underlying investment strategy of the fund is set to shift in order to lower “the level of investment risk in the scheme, as well as continuing to de-risk in the future”, BT said.

It said that 15% of its assets had already been moved away from growth holdings to lower-risk investments, such as bonds. This provided “a substantial reduction in risk for the scheme and BT”, the company said.

For many in the industry, however, the headline figure of £4.5bn towards the overall deficit was the main factor.

“The quantum is always welcome,” said Richard Farr, managing director at Lincoln Pensions. “Clearly it is a large quantum because the scheme itself is very large.”

“It is a welcome development and others should follow [BT’s] example,” he added.

According to details released by BT, under the auspices of the new scheme members would be able to build up a defined benefit pension on up to a certain salary threshold. Anything over that limit would trigger a contribution from BT into a DC pot, the company said.

BT’s plans for a hybrid pension drew particular praise from the Communication Workers Union (CWU), one of the unions representing employees of the telecoms group. CWU said it was clear that it was “the right thing to do to reach a deal with BT over the future of its defined benefit scheme”.

Andy Kerr, deputy general secretary of telecoms and financial services at CWU, said: “We feel the size of the pension deficit has vindicated our decision to reach an agreement on the pension scheme which will provide an innovative hybrid scheme with part defined benefit and part defined contribution for our members, lessening future risk for employees.”

Unions including CWU and Prospect worked to secure improvements to BT’s DC scheme as well as pay increases. The hybrid scheme plans were initially announced in March, with the aim of closing parts of the DB scheme at the end of this month. 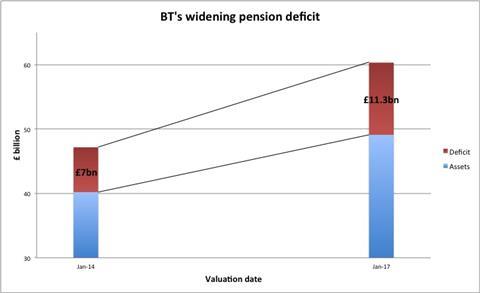 BTPS is the largest single-employer DB scheme in the UK with £49.1bn of assets as of the end of June 2017. However, it has long been struggling with a deficit that has grown by more than half in three years.

Last year it attempted to switch its inflation measure to reduce the size of future inflation-linked benefit increases, but despite support from the trustees it was rejected by the UK’s High Court in January.

In January, BTPS announced that its chief executive Eileen Haughey would step down following the completion of the valuation.