A legislative proposal for a pan-European personal pensions product (PEPP) is one of the most important measures for the European Commission’s Capital Markets Union (CMU) mid-term review and will be put forward by the end of the month, according to the commission’s vice-president Valdis Dombrovskis.

Addressing delegates at an industry conference in Brussels yesterday, Dombrovskis, who is responsible for financial stability, financial services and the CMU, said that the PEPP regime “would lay the foundations for a safer, more cost-efficient and transparent market in affordable and voluntary personal pension savings”.

The PEPP would offer additional incentives for retirement saving, alongside occupational and state-based pensions.

Dombrovskis acknowledged that the draft legislation would need to address tax challenges, as tax incentives vary widely between member states.

With a PEPP in place, the European market for personal pensions products would grow “significantly faster”, Dombrovskis said.

EFAMA, the European fund management trade association, welcomed what it described as the “quick pace” with which the Commission was moving forward on the PEPP.

Matti Leppälä, secretary general of PensionsEurope, the European trade association primarily focused on workplace pensions, said it was pleased that the Commission had decided to proceed with the PEPP project.

“More funded private pensions in different forms are necessary for Europe to deal with the growing population and diminishing public pensions,” he said. “Increasing numbers of people are outside the scope of occupational pensions and good quality personal pensions can offer them better opportunities to save for their retirement and at the same time invest in the European economy.

“We look forward to learning how the Commission has resolved some of the difficulties in providing pan-European pensions, and especially what can be done with widely differing taxation rules which belong to the competences of member states.”

The PEPP initiative is one of the points from the Commission’s original CMU action plan, published in 2015. Presenting its mid-term review yesterday, the Commission also unveiled what it referred to as nine new “priority actions”.

These include facilitating the cross-border distribution and supervision of UCITs and alternative investment funds, delivering a more “proportionate” regulatory environment for SME listing on public markets, and ensuring follow-up to the recommendations of the High Level Expert Group (HLEG) on sustainable finance.

Dombrovskis said the Commission was determined to lead on work supporting green finance, which would require a deeper re-engineering of the financial system. The Commission would follow up on the HLEG’s work on how to integrate sustainability considerations into EU financial regulation in the first quarter of next year, he added.

Eurosif, the European responsible investment association, welcomed what it saw as a clear commitment to strengthen the EU’s leadership on sustainable investment.

“The mid-term review confirms the will for a re-engineering of the financial systems as a necessity for investments to become more sustainable,” it said. “Integrating sustainability in the EU regulatory’s policy framework allows for private capital to be mobilised and directed toward sustainable investment and to ultimately fit in with the [UN’s Sustainable Development Goals] as part of the UN 2030 agenda.” 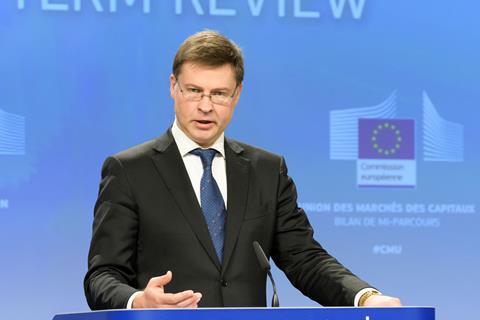