Two in five workers at German chemical and consumer goods company Henkel have accepted an offer to have their minimum-guarantee pension converted into a fixed lump-sum payment.

Speaking at the Handelsblatt conference on occupational pensions in Berlin earlier this month, Martina Baptist, head of pension management for Germany and Switzerland at Henkel, said half of retirees with pension levels of €200 a month or less took the offer of converting their guaranteed pension income to a lump-sum payment, when the offer was introduced in 2015-16.

Since 2017-18 the company has been making a similar ‘buyout’ offer to employees covered by Henkel’s AV 2004 pension plan.

Their basic pension, including an average guaranteed return, was converted into a guaranteed lump-sum payment upon retirement to buy out their “past services” accrued in the plan.

As for their “future services”, Henkel pays contributions to a defined contribution (DC) plan with a minimum guarantee of these payments and any contributions made by the employee – mostly via deferred income, known as Entgeltumwandlung. 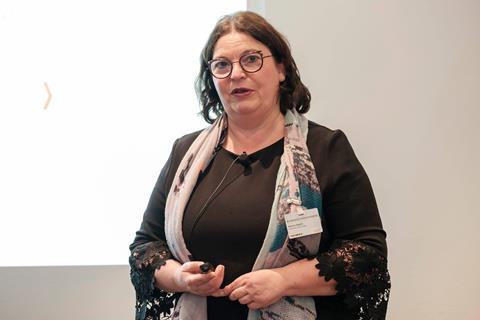 So far, 40% of a selected group of employees at the lower income end have accepted the offer, Baptist said. The company plans to roll out the offer to other employee groups all over Germany over the next few years.

“The other employees are actually expecting to be offered the buyout,” Baptist said. She did not say whether this would also include senior-level staff.

In a bid to reduce its pension liability risk, Henkel has taken various steps over the past two decades – including the introduction of a new pension plan, AV 2004, to replace its pure defined benefit (DB) plan.

The new plan consisted of a basic pension element with a guaranteed return of between 3% and 6%, with a top-up payment into a pure DC “building block”.

In 2004, existing employees were urged to join the new scheme – sometimes by “linking promotions to people agreeing to being bought out of their old pension contracts”, according to Baptist.

This buyout solution is now a key element in Henkel’s bid to further reduce its pension liability risk.

The AV 2004 plan was closed to new entries in 2011 when a DC plan with a guarantee on contribution levels was introduced for new employees.

Since then, the company has rolled out a campaign, dubbed “capital instead of pension”, to encourage more of the company’s 5,000 employees and retirees still covered by AV 2004 to switch to a one-off payment. 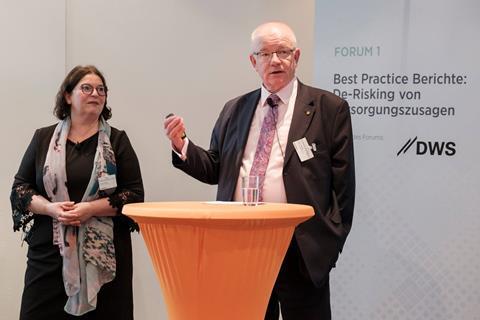 Stefan Oecking, partner at Mercer, which helped implement Henkel’s buyout exercise, said in his presentation at the Handelsblatt conference that a comprehensive information campaign was part of the buyout scheme.

“There was both individual information as well as group events, and people get a reminder on their choice before the offer expires,” he said.

He said many employees “find the offer very attractive”, mainly because the lump sum can be bequeathed, while accrued pension rights cannot.

In addition, the payment is guaranteed if the employee becomes disabled or ill, and can be paid out in installments or used to buy an annuity.

Baptist is convinced a lump-sum payment on retirement “is also a better fit for people who are planning to move abroad after retiring or want to buy a house”.

At the Handelsblatt conference various major German companies presented their de-risking plans for in-house pension plans – but Henkel is the only one with a major buyout scheme.

As per year-end 2018, Henkel’s DB obligations for its German plans amounted to €3bn, while plan assets stood at €2.7bn. A decade ago, liabilities were €1.8bn and plan assets were €1.5bn.