The top prize was one of six awards scooped by Denmark’s biggest pension fund, including for Long-Term Investment Strategy, another gold award category.

The DKK934bn (€105bn) investor was also recognised for its work in emerging markets and innovation.

Accepting the main award,Bo Foged (pictured far right above) said, “I didn’t expect to receive this prize, but thank you to the jury and the audience and also the team at ATP who worked really hard this year.” 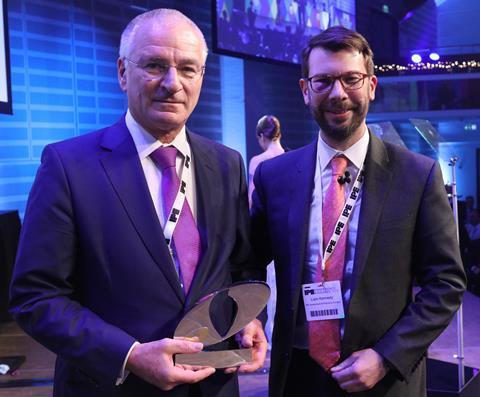 ”The ultimate goal for us to achieve is to deliver the best for our beneficiaries. Thank you very much,” he said upon receiving his award.

Böhm has engaged on matters such as EIOPA’s pension fund stress tests and the European Commission’s proposed regulation on sustainable investment.

APG won Pension Fund Achievement of the Year for its GroeiFabriek (Growth Factory), which is the Dutch investor’s response to the need to innovate. It aims to stimulate the growth of new ideas from within APG and to build an ecosystem of continuous innovation.

The 2019 IPE Awards attracted more than 430 entries across 43 categories, with participating investors having €2trn in assets under management. Ninety one judges were involved in assessing entries.