​ATP weathers storm with ministry man at the helm

Denmark’s ATP may have just presented a staggering investment loss of DKK58bn (€7.8bn), but given the credentials and qualities of its new leader, the institution’s future arguably looks more secure than ever.

On the first day of September, Martin Præstegaard – who was installed little more than a month before as ATP’s chief executive officer – told assembled journalists in the statutory pension fund’s downtown Copenhagen offices that fund had made its biggest-ever six-month investment loss.

Its geared investment portfolio, which takes 20% of all contributions and tries for returns high enough to keep the purchasing power of its guaranteed pensions, made a loss of 36.4% amid the relentless downturn on world financial markets between January and and June this year.

These bonus-potential assets had diminished to DKK108bn by mid-2022 from DKK160bn at the beginning of January. And because interest-rate rises hit bond prices, ATP’s overall portfolio – which is largely composed of fixed-income instruments backing pension guarantees – ended June worth just DKK732.6bn compared with DKK947.3bn at the end of 2021.

Since ATP counts the entire Danish population as its scheme members, it was vital for it to demonstrate that pensioners would still receive the same amount come the end of the month.

The investment loss was not a disaster, said Præstegaard, because ATP had a guaranteed product.

“So our members actually experience that their pensions are unchanged, and that’s our main role in the Danish pension system,” he said.

Leading his first press conference as ATP’s CEO, Præstegaard appeared more unflustered and matter-of-fact than his recent predecessors, a type of presence that could be a boon for the organisation that needs to inspire public and political confidence to maintain its legitimacy.

He describes himself as a “pretty stable” kind of person.

“I think to be there and to keep calm when the storm comes has always been something exciting,” he told IPE in an interview.

Præstegaard is the first ATP CEO for decades to have a strong governmental background, the last one was the pension fund’s first CEO from 1989 to 1998, the late Palle Simonsen, who had been a government minister.

“In many ways, I’m attracted to big institutions with some kind of societal meaning, and societal weight,” he said. 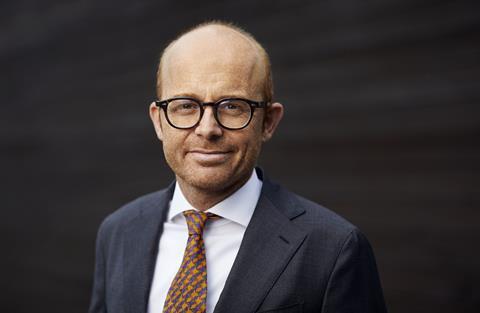 “In many ways, I’m attracted to big institutions with some kind of societal meaning, and societal weight”

With Præstegaard now in charge, ATP’s leadership could be seen as returning to safe territory following the rocky period around the resignation of former CEO Christian Hyldahl in November 2018.

Hyldahl quit amid a political storm over the returns-enhancing practice of classic index arbitrage dividend tax speculation, which had taken place under his leadership at Nordea 10 years before.

That practice had come to outrage many people in Denmark, and feelings about the integrity of Danish financial institutions’ leadership were also running high because of the Danske Bank money-laundering scandal.

Speculation ensued that a permanent state secretary within a ministry might be preferred as the next ATP CEO to avoid another harmful political furore. But such a candidate might not meet the Danish FSA’s “fit and proper” criteria for approving leaders of financial businesses, because of a lack of financial sector management experience.

Bo Foged, who had been Hyldahl’s deputy, finally agreed in June 2019 to take on the top role after initial reluctance because of the media attention the role would bring – and at the same time, Præstegaard was brought in as deputy CEO.

Præstegaard told IPE he was confident there was solid support in Denmark for the ATP scheme as part of the country’s pension system.

“A big majority of the political parties in parliament have just changed the ATP law to change our business model to be able to create even better pensions,” he said.

“In that process it was very clear that we enjoy broad support, and I think people understand that it’s good to have different companies with different roles in the system,” the CEO said.

Apart from its original task of running the ATP pension scheme, which was founded in 1964, the organisation now has an administration business arm alongside its pension and investment division, which pays out two thirds of all Danish state benefits, amounting to DKK300bn a year.

Præstegaard agrees that his background in government could be an advantage here, but also on the pensions and investment side because of its regulation.

“And, of course, one of my tasks is to interact with stakeholders around us, so I am pretty confident I can handle that part of it,” he said.

The CEO sees the main challenges for ATP under his leadership as developing the investment portfolio and being a responsible investor.

“Creating the right portfolio in this environment is a challenge of course, and we still believe in our all-weather risk factor approach – but we have to handle that and develop it,” he said.

“Then, of course, when we look into specific asset classes, such as direct investments in companies and real estate, you have to do even better all the time. So, basically, it is hard work, going to the office every day to achieve that,” Præstegaard said.

The overall strategy has to be evaluated constantly and fine-tuned, he said.

“And that’s a bigger challenge now because we don’t have the central banks to help, so now we have to focus even more on wealth creation, and in many ways that’s healthier,” he said.

Alongside ATP’s work with its ESG commitments, Præstegaard singled out biodiversity as an aspect of environmental sustainability set to receive more attention.

“The issue of biodiversity is much more immature than the climate agenda, which we have been working with professionally for quite some years now.

“When you look at biodiversity, you can see it’s developing in the wrong direction in some parts of the world now, and as very long-term investors we have to start to understand it, and have some kind of dialogue with our companies in our portfolios to see how they are reacting – and what can they do to stop this enormous crisis from happening,” he said.