Hermes Investment Management has entered into a partnership with Util to test the Oxford-based fintech’s “holistic” company valuation methodology.

The asset manager said Util’s proprietary methodology “addresses the need for a standardised and comparable analysis that considers a company’s social and environmental performance alongside its financial performance”.

Over the next 12 months Hermes said it would assess and audit Util’s methodology by applying it to specific Hermes listed equity funds. Leon Kamhi, head of responsibility at Hermes, is to join Util’s advisory committee.

According to Util’s website, the methodology quantifies both the financial and non-financial value a company creates and destroys “across a wide range of stakeholders that interact with a company on a daily basis”.

The value can be broken down by stakeholder group and UN Sustainable Development Goal (SDG).

Hermes said the analysis would help it identify and oversee investments to deliver “superior financial and non-financial performance”.

Kamhi said: “The effective measurement of social and environmental returns to stakeholders, alongside the financial, is key to enabling the investment industry to deliver the holistic needs of beneficiaries and achieving the UN SDGs.”

In June last year BNP Paribas Securities Services partnered with Sycomore Asset Management to accelerate the deployment of a new metric for assessing the environmental impact of the economic activities of a company, a portfolio or an index.

KBI Global Investors (KBI GI) says it has quantified its natural resource strategies’ contribution to achieving the UN SDGs as a percentage of the constituent holding’s revenues. 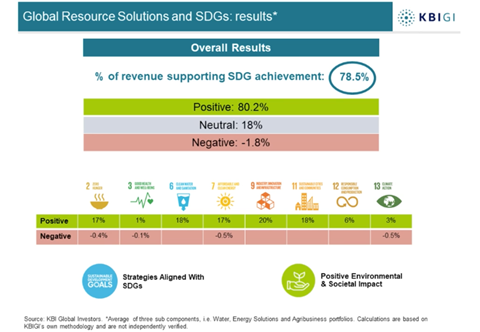 The Dublin-based manager, formerly Kleinwort Benson Investors, took the total amount of revenue earned by the companies in the portfolios and then assigned that revenue to various business activities.

For each business activity it then decided whether it had a positive, neutral or negative impact on delivering the SDGs. On a weighted basis it then calculated the percentage of any portfolio’s revenue that was positively or negatively contributing to the achievement of the goals.

Taking the firm’s water strategy as an example, the asset manager said its work showed that 68% of the portfolio’s business activities contributed directly to the achievement of the SDGs on a net basis and that seven of the 17 SDGs were directly benefitting from the portfolio’s investments.

KBI GI described the quantification as “a breakthrough” and said it followed a body of work carried out over the course of the last six months.

Eoin Fahy, head of responsible investing at KBI GI, said the asset manager was still “diving into the numbers” and evolving its methodology, but that it was hopeful its work might provide a methodology for companies to report their own impact as well.

“We like the transparency the new approach brings and will most certainly be reporting to clients in this way going forward – and our work may well prompt the ‘green washers’, those trading on a generic alignment of their strategies with the SDGs, to revisit their approach,” Fahy added.

Schroders earlier this month warned about the risk of investors being misled by inappropriate use of the SDGs.

“SDGs were not designed for investors,” it said. “We are concerned they are being misappropriated and misused.”

Established corporate social responsibility activities were being “squeezed into ill-fitting SDG categories”, it said, and companies tended to report on obvious goals such as ‘economic growth’ or climate action’ despite the indicators underpinning the goals lacking company-focus or materiality.

Adopted by the UN General Assembly in 2015, the goals set the agenda for an attempt to solve the world’s biggest environmental and societal challenges by 2030. There are 17 goals and 169 indicators to measure progress against them. They have captured the imagination of investors and companies — although Schroders contended that they were aimed more at policy makers than the private sector.

“Most of these measures are directed at systemic challenges that investors and companies have no direct mechanism to address,” said the asset manager.

It estimated only 15-20% of the 169 metrics could reasonably be measured at a company level and only 6-8% using data currently available.

Without a consistent reporting framework, companies and investors could apply positive filters to their SDG efforts, demonstrating constructive activities without an objective assessment of the negative impacts their business might have. 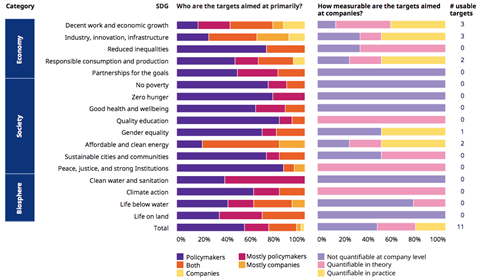