Schemes ‘must invest more in data and admin’ to support dashboards

UK pension schemes must be prepared to put much more money into their administration and data services in order to make the proposed pension dashboard concept workable, according to industry experts.

The UK government has introduced draft legislation providing for rules requiring schemes to supply data to organisations creating dashboards, online portals designed to display all an individual’s pension savings in one place. The UK’s Money and Pensions Service (MAPS), a public financial guidance body, is leading the dashboard development.

Discussing the proposals at the Pensions and Lifetime Savings Association’s (PLSA) annual conference in Manchester last week, Nicola Mark – head of the Norfolk Pension Fund and chair of the trade body’s local authority committee – said administration had to find a place on trustee boards’ agendas.

“For any trustees out there, you’re going to have to start spending some real money on administration to make sure that we are able to extract all this data.”

She added that many older pension schemes still had physical records stored in boxes or on outdated technology such as microfiche, which would require significant investment and resource to digitise and harmonise in preparation for providing data to dashboards. 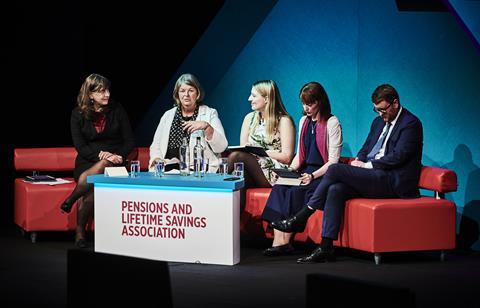 Royal Bank of Scotland pension director Carol Young, who chairs the PLSA’s defined benefit (DB) policy committee, added that the industry would “have to be realistic about the timeframe” for bringing DB data onto the dashboard.

In particular, she said, there were challenges around how to display accrued DB pensions. While defined contribution (DC) pots were expected to be displayed as a total figure, using a similar approach for DB pots could inadvertently encourage members to attempt to transfer out and lose DB protections, she warned.

“Is there going to be a way to share the relevant amount of information around what people might be giving up if they transfer?” Young said. “There will be some important practical considerations, and particularly from DB members’ perspectives there are some important safeguards to consider about how that data is shown.”

Gregg McClymont, director of policy at UK master trust The People’s Pension, added that protections applied to members of occupational pension schemes should be extended to investors in retail pension products.

“Beyond the data, beyond the political differences, as we get into the actual dashboard, I think there is the fundamental question of how do we ensure that your members are protected appropriately,” he said.

McClymont, a former pensions spokesperson for the Labour Party, added that the draft legislation was unlikely to be passed soon, given the amount of parliamentary time being taken up by Brexit discussions.

The Pension Schemes Bill, as it is called, was introduced to the UK parliament’s upper house on 15 October and is scheduled for a second reading on 30 October. The prime minister still wants the UK to leave the EU on 31 October but this weekend was forced by law to write to the EU to ask for an extension.

Earlier this month the pensions regulator ordered 400 schemes to carry out an urgent data review, and said accurate record-keeping would be crucial for the pensions dashboard.