Both funds cater for employees of FirstGroup – a private company that operates bus services – in Glasgow and Aberdeen. UK bus services were privatised in the 1980s but pension arrangements remained with the LGPS.

In its latest annual report, the Strathclyde fund – which manages £21.3bn in total for current and former council workers in the Glasgow area – said the No.3 Fund was “well past its natural growth phase and starting to enter run-off”.

In the 12 months to the end of March 2018, the No.3 Fund paid out £7.8m in benefits while taking in only £1.7m in contributions from its single sponsoring employer and its diminishing number of active members. 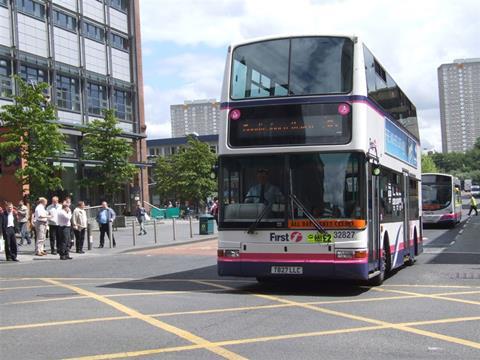 A FirstGroup bus in Glasgow

Similarly, the Aberdeen City Council Transport Fund was also cashflow negative, according to its latest annual report. In the 2017-18 financial year it paid out £4.1m and received contributions of £2.4m.

However, a spokeswoman for Aberdeen City Council told IPE the NESPF was still considering options for an insurance buy-in once the merger was complete.

The deal is currently subject to agreement from the NESPF’s oversight committee and Scottish ministers. A spokesman for Glasgow City Council said the merger was slated to complete “some time later this year”.

If the merger goes through, it will mark just the second time a private sector company has consolidated schemes within the LGPS.

In late 2017, FirstGroup transferred two schemes with a combined £700m in assets from the LGPS funds for West Yorkshire and South Yorkshire to the Greater Manchester Pension Fund, creating a £1bn transport scheme.

Scotland’s LGPS funds are currently subject to a consultation regarding future options for consolidation – although Strathclyde has argued against pursuing a similar approach to asset pooling as has been applied to LGPS funds in England and Wales.