The UK’s gross pension liability across workplace and state provision grew by £1trn (€1.1trn) in five years, according to data from the Office for National Statistics (ONS).

The total included an estimated £4trn of unfunded liabilities linked to the UK’s state pension – equal to 213% of GDP.

Private sector defined benefit liabilities were estimated at £2trn by the ONS.

Workplace defined contribution (DC) schemes had roughly £240bn invested in them at the end of 2015. A further £302bn was held in individual DC plans, the ONS reported, although this was not included in the £7.6trn figure.

Steve Webb, director of policy at Royal London and pensions minister during the period measured by the ONS, said the figures were “truly mind-boggling”.

“Today’s population has built up £7.6trn in pension promises but has only set aside about a third of that amount to pay for them,” Webb said. “The rest will have to be financed by tomorrow’s workers.

“If we are to have a meaningful debate about how we pay for an ageing population and about fairness between generations, figures like these need to be published on a regular basis and should inform policy-making.”

ONS data also showed that more than a third of employees did not have a pension at all, although the statistics were gathered halfway through the rollout of automatic enrolment rules. 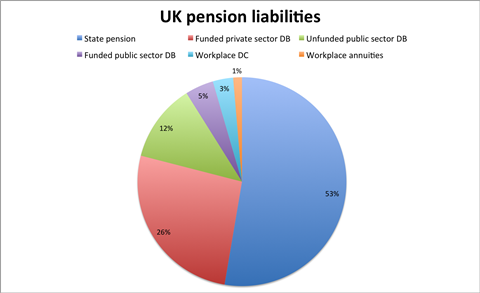