The average equity allocation of UK pension schemes fell below 30% for the first time in the 12 months to the end of March 2017, according to data from the Pension Protection Fund (PPF).

In its latest collection of UK scheme data, known as the Purple Book, the lifeboat fund for defined benefit (DB) schemes reported that the weighted average bond allocation reached a high of 55.7%, while equities fell to 29%.

The weighted average allocation to property rose to 5.3%, the highest figure since 2008.

Within the equity allocation, schemes invested 20.5% in UK listed equities at the end of March, down from 22.4% a year earlier. In the context of all asset classes, it meant the average scheme held just 6% in UK equities, according to Hans den Boer, chief risk officer at the PPF.

This continued a steady decline in domestic allocations since 2008, the PPF said.

The data also illustrated the continuing closure trend across the DB sector. Just 12% of schemes remained open to new members at the end of March, the PPF said, while the proportion of schemes closed to both new members and new accruals rose from 35% to 39%. 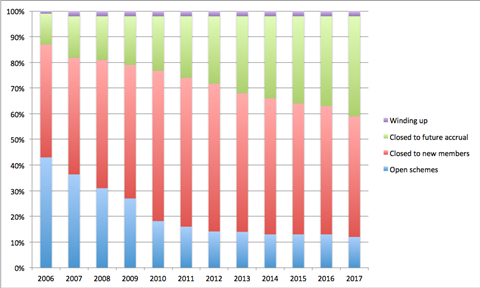 Despite high-profile cases of underfunded schemes in the UK – some of which have required intervention from the PPF or the Pensions Regulator – the overall funding picture improved in the 12 months to 31 March.

Based on the PPF’s internal calculations – which measure a scheme’s funding level relative to the level of benefits provided by the PPF – the aggregate funding ratio rose from 85.8% to 90.5% year-on-year. This meant the total shortfall fell to £161.8bn (€188bn), compared to £221.7bn a year earlier.

However, the PPF said positive asset returns had been more than offset by falling government bond yields. The improvement in the aggregate funding picture was instead due to up-to-date valuations and a shrinking universe of pension funds. In addition, scheme sponsors paid £11.4bn in special contributions during the 12-month period, on top of regular contributions.

Andy McKinnon, chief financial officer at the PPF, said: “It has been another testing year for defined benefit pensions, with a succession of events casting a spotlight on the sector. For schemes and their sponsors, fulfilling past promises, made in a very different environment, has become much more expensive and much more challenging.

“While the landscape remains tough, we are seeing signs of progress. Scheme funding, while volatile, continues to show signs of improvement. At the same time, companies are taking further measures to reduce risk, both by closing their schemes to future accrual and shifting their asset allocation away from equities and into bonds.”

Den Boer added: “While we welcome efforts to reduce risk and improve scheme funding, we should not lose sight of the challenge ahead. The current economic backdrop, as well as scrutiny faced by the entire industry, suggests conditions will remain tough in 2018.”

A separate study by consultancy Hymans Robertson estimated that all FTSE 350 companies will have stopped accrual into the DB schemes by 2027.

More than half – 55% – of the UK’s top listed companies had closed their schemes to new members and new accrual, the consultancy said. Increasing pressure to plug deficits would accelerate closures, the company argued. Future service contributions to schemes were pushing towards 50% of total payroll costs for some companies, Hymans Robertson said.

Jon Hatchett, head of corporate consulting at Hymans Robertson, said: “This, coupled with the pressure to increase deficit contributions, will lead to even more companies taking further action to reduce costs and closing to future accrual. If we project the current trend forward, we expect future accrual to be switched off altogether in the FTSE 350 by 2027.”

However, when questioned about this prediction today, the PPF’s McKinnon and Den Boer played down the likelihood of this outcome.

“There is still a trend slowly towards more schemes closing, but I don’t think they will all close in 10 years’ time,” said Den Boer.

McKinnon added: “There are a significant number of schemes still open and taking new members and accruals.”