A panel of experts scrutinising the valuation of the UK’s biggest pension scheme has recommended a series of changes that could reduce its reported deficit significantly and cut planned contribution increases.

The Joint Expert Panel (JEP) – appointed earlier this year to assess the 2017 valuation of the £64.4bn (€73bn) Universities Superannuation Scheme (USS) – yesterday published its first report, in which it argued that the scheme had been too cautious with assumptions used to value its liabilities and set contribution levels.

The panel also criticised the Pensions Regulator (TPR) for not recognising the collective strength of the 350 higher education establishments that sponsor USS. This had also encouraged an overly cautious approach as USS’ trustee board worked to keep the scheme in line with changing regulations.

According to the report, the expert panel’s suggestions, if implemented, could result in combined contribution levels rising from 26% of salary to 29.2%, a significantly smaller rise than under USS’ current plan, which will see the contribution rate hit 36.6% in 2020.

“As suggested by other commentators, alternative ways of arriving at a valuation of technical provisions are open to USS and should be explored,” the JEP’s report said.

The panel questioned one of the key building blocks of the controversial 2017 valuation – which resulted in proposals to close the defined benefit section of the scheme, prompting nationwide industrial action. 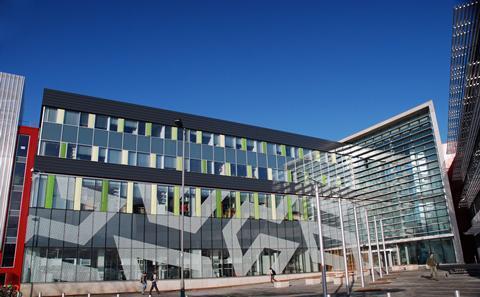 University of Southampton, one of USS’ 350 sponsoring institutions

The test used by USS – part of which involved a detailed survey of the 350 employers – drove the scheme towards a low return investment strategy “that results in a higher deficit and higher contributions than would be the case if the current investment strategy were maintained”, the panel said.

It questioned whether employers’ appetite for risk had been assessed appropriately, saying that the way in which it had been applied through this test had contributed to the adoption of strong risk aversion.

The panel argued that the unique features of USS and the higher education sector had not always been consistently considered, either by TPR or by USS itself.

“In particular, the panel believes that insufficient weight has been given to the fact that USS is a large, open, immature scheme which is cashflow positive and cap adopt a very long-term time horizon.

“By giving this strength and diversity a greater weight, the panel believes that the trustee and the employers may be able to agree a larger risk envelope.”

“Our observations, conclusions and recommendations are intended to be constructive and should be read in that spirit.”

The scheme is three years into an investment strategy that is set to de-risk the portfolio over the course of the next 20 years.

The report unanimously recommended “four areas where adjustments to the valuation should be considered”:

Joanne Segars, the expert panel’s chair, emphasised that the JEP – unlike the trustee – had had the luxury of the benefit of hindsight and had not sought to be critical of any party involved in the valuation.

“Our observations, conclusions and recommendations are intended to be constructive and should be read in that spirit,” she said.

The scheme for the higher education sector said that the solutions proposed by JEP reflected its terms of reference, but would require employers to take on higher levels of risk and pay higher contributions “than has been expressed to us to date, through the valuation process”.

“There may well be areas where our opinion and understanding differs from that of the panel, but we will want to reflect on the report in due course,” it said.

It reiterated its hope that the JEP report could provide the basis for employees and universities to agree a way forward, but said that “unless and until alternative has been agreed, consulted upon, and implemented”, the move to higher contributions under its current cost-sharing process would continue.

The trade union’s general secretary Sally Hunt hailed the report as “a significant landmark in our ongoing campaign to defend members’ pensions”.

“We welcome the JEP’s proposal that the valuation should be adjusted and are also encouraged that the panel now wishes to look in detail at alternative methods for future valuations,” she added.

UUK said it would start to consult with scheme sponsors next week on their views on the panel’s recommendations to inform talks with UCU and the USS trustee.

“This will include examining employers’ willingness to accept greater levels of risk and to pay more into the scheme than their current contribution level of 18% of salary,” said Alistair Jarvis, UUK chief executive.

The full JEP report can be downloaded here.