Campaigners gathered outside the office of the UK’s largest local government pension fund today to call for it to divest from fossil fuel companies.

Campaign groups including Fossil Free Greater Manchester and Extinction Rebellion demanded that the £22.5bn (€25.1bn) Greater Manchester Pension Fund (GMPF) exit completely from its stakes in fossil fuel firms. Citing data compiled by Fossil Free UK, the campaigners claimed that as much as 10% of the fund’s portfolio was invested in such companies.

In a press release ahead of the protest, Fossil Free Greater Manchester member Stuart Bowman argued that GMPF was “totally out of touch with the public mood” and had “no clear plan” for divestment.

However, GMPF – part of the UK’s Local Government Pension Scheme (LGPS) system – said in a statement yesterday that it was “working hard to become carbon neutral” by 2050 or sooner, in line with a plan set out in 2017. It was in the process of moving £2.5bn of assets into low-carbon strategies “targeting a significant reduction in carbon footprint and intensity”.

Representatives of GMPF met with Fossil Free Greater Manchester last week. While both parties agreed on a goal of a zero-carbon economy “as quickly as possible”, GMPF said it was also “committed to a just transition ensuring the interests of workers and communities are properly taken into account”. 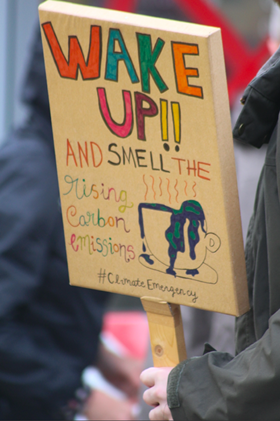 A spokesperson for the fund said: “We are the biggest local government investor in renewables and energy efficiency with £0.5bn invested and leading investment opportunities for other funds.”

The spokesperson added that GMPF’s work on renewable energy and related investments “needs to be balanced” with the fund’s strong performance track record. The pension fund said it had added £3.7bn of value “above that of the average LGPS pension fund”.

GMPF also highlighted its fiduciary duty to ensure that investment decisions “do not threaten financial performance”. Over the past three years, it said, the investment portfolio achieved more than £400m in additional returns than if it had removed stakes in companies such as oil giant BP or gas distributor Centrica.

Rushing to divest would cause “material financial detriment” to GMPF, the spokesperson said, with potential consequences for public sector employers, workers and council tax payers, all of whom could be forced to pay more towards the pension scheme.

Other LGPS funds have also rejected blanket divestment strategies. A number of large schemes responded to criticism from Friends of the Earth last year by stating that divestment did not affect the companies involved.

Earlier this month, pensions minister Guy Opperman called on pension schemes to play a major role in the UK government’s plan to end its contribution to global warming by 2050.

Low-carbon indices: Work in progress
Providers acknowledge that low-carbon indices are imperfect, but argue they are an invaluable tool to help reduce climate change risk in a portfolio