ABP to roll out visualised pensions pot next year

The €403bn Dutch civil service scheme ABP is to provide all its 1m active participants an overview of their accrued pension rights as well as their estimated final accrual at retirement if they stay with the pension fund.

Nicole Beuken, ABP’s director, said the “pensions pot” was a communication concept to visualise how much the individual participants have saved up so far.

Beuken said that the concept had been proven to work and would be introduced from next year.

Beuken explained: “An important reason for the overview of accrued pension rights is that we wanted to remove incorrect impressions among participants.

“Some [people] wonder whether they will ever receive their contribution in benefits, or even think there won’t be any benefits left at all at retirement.”

During this year, ABP extensively tested the pensions pot among 3,000 participants.

Beuken said the testing had revealed that participants preferred a simple reflection of their accrued pension, and that they didn’t appreciate additional information, such as various scenarios. 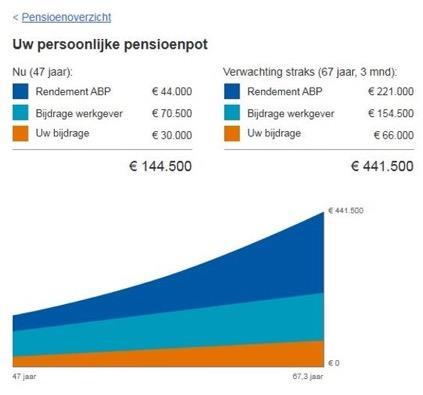 An example of ABP’s visualisation tool

The visualisation takes the form of a graph, starting with current pension savings and continuing to the expected accrued assets at retirement.

Each stage shows which part of the capital has been paid by the participant, which part by the employer, and what has been contributed through the pension fund’s return on investments.

The forecasted return is based on the result on risk-free investments, as is also used in the uniform pensions statement (UPO), a standard document issued to all pension members across the Netherlands. However, the graph of the pensions pot doesn’t show the percentage used to calculate accrual through investments.

Beuken noted that such an inexact and simple illustration initially triggered resistance from legal experts and actuaries, but she said they were eventually convinced “as the concept was very easy to explain to participants”.

Raoul Willms, programme director at APG, ABP’s pensions provider, said that the visualisation concept was meant to prompt participants into action and increase their confidence in the pension fund.

“Tests have showed that this works, as half of the participants visited their pensions portal at ABP to seek additional information,” Willms said. “Their answers also made clear that their faith in the pension fund has increased as a result of the information.”

Beuken said that other pension funds were allowed to use the concept developed by ABP and APG.

“They could also adjust it to their specific situation, although I hope that the resulting setups aren’t too much different, as this would not be in the interest of the participants,” she said.

Beuken added that additional testing would continue into the first quarter of 2018.