The European Central Bank (ECB) has signalled its intention to end its €2.4trn bond-buying programme at the end of this year.

However, in an announcement deemed by some investors as surprisingly dovish, the central bank indicated that it could keep interest rates at their current ultra-low levels until well into 2019.

Speaking in Latvia yesterday, ECB president Mario Draghi said the bank would halve the monthly value of assets purchased through its quantitative easing (QE) programme for the last three months of this year, from €30bn to €15bn.

As long as inflation remained within its desired range, the ECB said it would cease buying new assets at the end of December.

Asset managers were surprised by the tone of the president’s comments, however, as he spoke of keeping interest rates low at least through the summer of 2019. 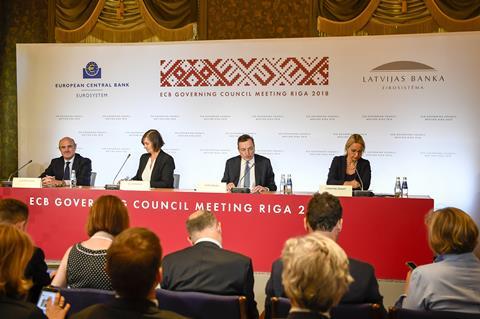 The ECB planned to keep reinvesting the proceeds from maturing bonds purchased through QE “for as long as necessary to maintain favourable liquidity conditions and an ample degree of monetary accommodation”, it said in a statement yesterday.

He added that the ECB “stands ready to adjust all of its instruments as appropriate” to meet its inflation target of close to 2%.

While the end to QE was expected by markets, he said the bank’s decision to commit to not hike rates until later in 2019 was “surprising” given that inflation forecasts indicated that the bank’s target was in sight.

“Second, extrapolating the steady fall in unemployment the euro-zone has now enjoyed for many years, the [unemployment] rate will be back at 2007’s low levels by the time the ECB hikes for the first time this cycle,” Peters added.

“The slowing in euro-zone data at the start of this year is clear, but this feels like an overreaction from a central bank that we would expect to remain a steady hand with a medium-term outlook.”

“The still quite dovish ECB should also further help European risky assets which had seen risk premia rise on the back of developments in Italy,” Ahmed said. “All in all, global liquidity is moving towards a more tightening stance but the ECB is playing its role in trying to ensure that the journey remains gradual and anchored.”

The euro was likely to weaken against the dollar, according to Larry Hatheway, chief economist at Swiss asset manager GAM, based on the contrast between the Federal Reserve’s plan to raise interest rates twice more by the end of this year, and the ECB’s more conservative stance.

David Riley, chief investment strategist at BlueBay, added: “The euro is understandably weakening against the dollar with the Fed ever more confident in the economic outlook and the need to raise interest rates, and the ECB that remains cautious about removing its extraordinary monetary support.

The Euro Stoxx 50 index closed 1.4% higher last night, while German 10-year Bund yields up 0.5% during the day at 6pm UK time on Thursday.