Asset managers and other institutional investors who claim to have sustainability goals will need to show how their investments are aligned with these objectives under new rules proposed by the European Commission today.

The information they would have to disclose would include the sustainability or climate impact of their products and portfolios.

The requirements are part of a package of legislative proposals the Commission had promised when presenting its sustainable finance action plan earlier this year, aimed at harnessing the capital markets to help implement the international agreement on climate change that was reached in Paris in 2015.

The Commission today said its proposals “will allow the financial sector to throw its full weight behind the fight against climate change”.

Speaking at a press conference earlier this morning, Commission vice-president Valdis Dombrovskis said: “On climate change, we are running out of time.

“The Titanic could not turn to avoid the iceberg at the last minute and we will soon be in a very similar situation.” 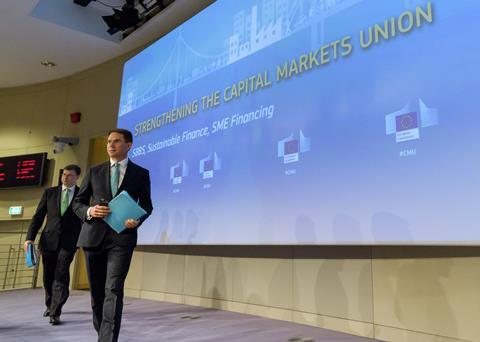 Under the proposed disclosure requirements, according to the Commission, “all financial entities that manage investments on behalf of their clients or beneficiaries will now have to inform them about how their activities are impacting the planet or their local environment”.

The proposed regulation would also require asset managers, pension funds, and insurers to report on the procedures they have in place to integrate environmental, social and corporate governance (ESG) risks into their investment and advisory processes, and the extent to which these risks were expected to have an impact on financial returns.

Exact requirements about the presentation and content of the information are to be set out via delegated acts, a special category of legislation that allows the Commission to specify the details of a law.

European pension funds fought hard to keep delegated acts out of the revised IORP directive, arguing that EU harmonisation in the area of pension provision needed to be kept to a minimum.

The Commission said its proposal for a regulation on the ESG duties of financial actors would introduce “consistency and clarity” on how institutional investors should integrate ESG factors into their investment decision-making process.

It would mean “greater transparency towards end-investors, ensuring comparability between products and discouraging ‘green-washing’ or misleading information,” it added.

What is green, what is not

The Commission today also proposed a regulation “on the establishment of a framework to facilitate sustainable investment”. This concerns the creation of an EU-wide classification system, or taxonomy, to designate which economic activities could be considered environmentally sustainable or not.

Dombrovkis said it was about setting out “what is green, what is not”.

An EU-wide classification system was “a first and essential step in efforts to channel investments into sustainable activities,” said the Commission. It would address the problems of “greenwashing” and confusing fragmentation, which undermined investor confidence.

The taxonomy could eventually serve as the basis for standards and labels for sustainable financial products, according to the Commission.

Under the Commission’s proposal for a sustainability classification system, an economic activity would be considered environmentally sustainable if it met the following requirements:

The criteria are to be set out in delegated acts and be based on advice from a technical expert group that the Commission is establishing.

A third proposal put forward by the Commission would create a new benchmark category for low carbon and “positive carbon impact” benchmarks. These would “foster a generally accepted market standard to measure a company’s footprint and, in consequence, an investment portfolio’s carbon footprint,” it said.

The Commission said this would tackle the risk of products not living up to their touted environmental credentials. Providers would have to respect minimum EU standards for methodologies when developing any new EU carbon benchmarks. A “positive carbon impact benchmark” would be the only type of benchmark deemed compliant with the Paris agreement’s goal of capping global warming at 2°C.

Benchmark providers would be free to provide a spectrum of other carbon benchmarks with “a different degree of ambition with respect to meeting climate-related objectives”, said the Commission.

The European Parliament and the European Council have to review and agree on all the proposals.