August 2020 saw the US Treasury market post one of its worst monthly performances since November 2016, while global equities, led by the US, reached new highs.

Though rates have moved lower this year, the initial sharp declines were followed by months of range trading. This was in contrast to the consistently positive moves from risk assets across sectors and throughout the world.

As the world enters the final quarter, the headiest days of the recovery in risk asset prices have probably passed. However, there are still compelling reasons to believe that this bull market may continue. Policy support remains extraordinarily helpful for risk assets. Central banks seem committed to whatever is necessary to support economic activity, as governments stand ready to further open the fiscal taps.

It is, for example, arguable that technology stocks, which have led broader indices higher may, as the digital revolution gathers momentum, continue to tempt buyers. Despite eye-watering valuations.

There are, unsurprisingly, also a variety of risks. As the struggle to contain COVID-19 continues, much optimism is built in to the hope that a vaccine will be found, sooner rather than later. Bad news on this front will damage sentiment. It would rekindle fears of future countrywide lockdowns as authorities battle to prevent or suppress subsequent waves of infection.

US inflation expectations, as measured through 10-year Treasury inflation-protected securities (TIPS) and breakevens, have risen recently (see graph). Real rates ground lower and nominal rates range-traded (after their precipitous February decline at the start of the COVID-19 pandemic).

There seems to be a consensus that market inflation expectations, particularly in the US, were too low, justifying the recent rise. However, sceptics remain unconvinced that the Fed will be able to manufacture inflation, having failed to do so for the past decade.

The inflation bears argue that the nature of the COVID-19 shock is disinflationary. They point to the large rises in unemployment rates, despite the temporary support from governments. These may point to significantly lower wage growth and consumer demand. 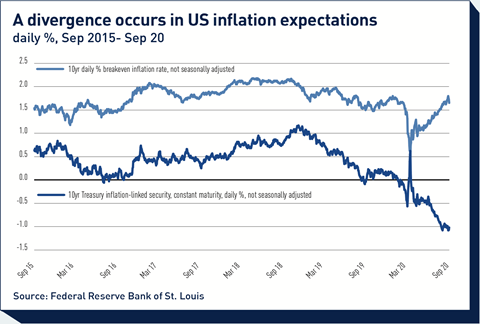 For the inflation bulls, however, this time might be different for inflation and expectations. Though few are expecting any significant rises in inflation, the Fed’s

decision to adopt a flexible AIT implies the anchoring of both nominal and real rates for longer even as the recovery progresses, and yield curves potentially steepen. And that could provide enough to create the first small, but structural, upward shift in inflation expectations.

And then there is geopolitics, as critical as ever and as difficult to second-guess. As the US elections draw near, investors will be tested trying to position and protect portfolios from the wide range of election outcomes. In the meantime, it is unclear whether Democrats and Republicans can find common ground despite their hostility. Financial markets are placing considerable reliance on their ability to put together another fiscal stimulus plan.

Brexit negotiations trundle on, but with ‘no-deal’ back on the possible outcomes list. Meanwhile, In the wake of Japanese prime minster Shinzo Abe’s decision to resign, there may be growing uncertainty as to the future of Abenomics.

And those are just some of the known unknowns.

Bonds
Historically, the average time for global equities (using MSCI ACWI) to recoup 60% of their recession losses would be three months into the succeeding expansion. This year equities, aided by technology stocks, have already regained 90% of their losses. In the same timeframe, developed market investment grade (IG) credit spreads have closed about 80% of their widening. That is in comparison with a ‘norm’ of about 50% retracement.

Having already reached year-end targets, IG credit markets may hopefully book some profits. At present, there seems to be a consensus that governments will continue to support the economy with direct transfers to corporates and households. It is also assumed that central banks will continue to buy bonds, essentially monetising that growing debt. As long as that paradigm remains, and economies remain protected from reality, current spreads will not look that expensive.

This year’s (virtual) Jackson Hole Symposium saw Federal Reserve Chair Jerome Powell unveil the US central bank’s revised flexible average inflation targeting (AIT) framework. There have been no concrete changes to the Fed’s position on monetary policy, yet it clearly has dovish implications for keeping rates lower for longer. Markets were boosted on their upward journeys as risk assets took the move as positive.

There may be too much optimism about what the Fed might do next. Currently, its bond purchases are explicitly aimed at smooth market functioning. However, observers are starting to extrapolate that the Fed will soon be altering its composition of asset purchases. That is perhaps skewing to longer maturities, embracing a form of yield curve control.

Currencies
Although the euro has appreciated significantly this year, the European Central Bank (ECB) has remained silent. It has not yet referenced the possibility of currency strength weighing on inflation expectations. The region has posted weak inflation figures among disappointing economic activity data.

From the ECB’s own analysis, a 1% appreciation in the euro’s nominal effective exchange rate (NEER) would tend to lower inflation by 0.04% (that is a weighted average of nominal bilateral rates between the euro and a basket of foreign currencies). There are, however, limited options for the ECB to weaken the currency. A stronger euro is in part a reflection in the tail risks of a potential EU break-up.

While the ECB may be quietly uncomfortable with a stronger euro, a weaker dollar ought to be supportive for global trade. The National Bureau of Economic Research, a US think tank, has done calculations on the economic impact of a stronger dollar. It estimates that a 1% dollar appreciation against all other currencies would suggest a 0.6% decline, within a year, in the volume of total trade between the rest of the world (controlled for the global business cycle).

Dollar weakness has come in conjunction with the global economic recovery and the rise in risk assets. However, since early August the currency has not moved. Global economic data has disappointed with Europe doing badly. If growth continues to wane – possibly because of rising COVID-19 infections – then in a more listless foreign exchange market more focus might land on some of the more idiosyncratic situations. For example, it could hit sterling as Brexit discussions appear to make little progress and whispers of ‘no-deal’ resurface. 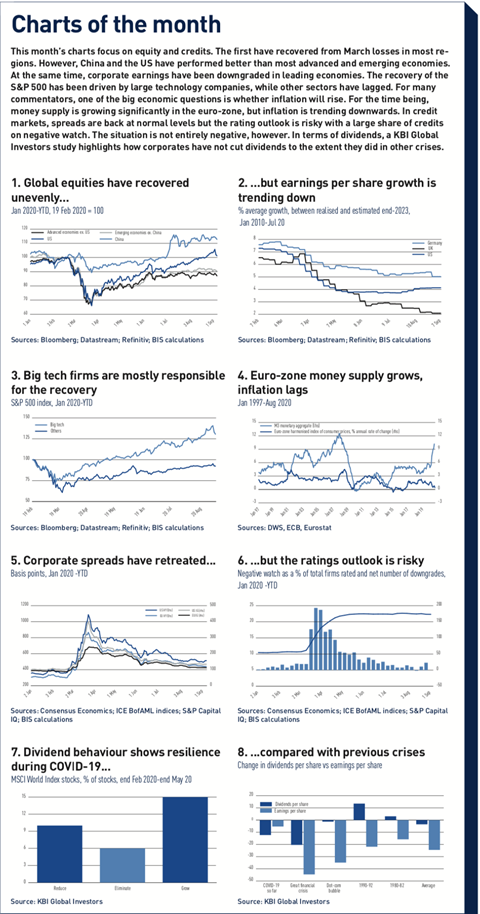