UK local authority pension funds took their long-running battle with accounting standard setters to Ireland this month as part of an inquiry into the country’s banking crisis.

The LAPFF has previously argued that international financial reporting standards (IFRS) produce fantasy or illusory profits that mean companies are at risk of paying out unlawful dividends from capital. It has obtained a legal opinion on this point, but the UK’s audit regulator, the Financial Reporting Council (FRC), has disputed this interpretation of the law.

In his evidence to a joint Irish Seanad and Dail parliamentary committee, Bush referred to a 2005 letter from Ireland’s Accounting Standards Board to the UK Department of Trade and Industry.

He said: “The letter stated that they know what company law is, that they do not agree with it because they believe it to be outdated, that they are setting standards that are going in a different direction and that they believe the law should be changed to catch up with the standards.”

The banking crisis that hit Ireland in 2008 eventually led to the country seeking assistance from the International Monetary Fund and liquidity support from the European Central Bank.

John McGuinness, chairman of the joint committee, said the Irish public had picked up the tab for the banking system bailout that they should never have entered into, due to a potentially flawed and illegal accounting model. “We are paying back a debt that we should not be paying back,” he said.

The FRC and Ireland 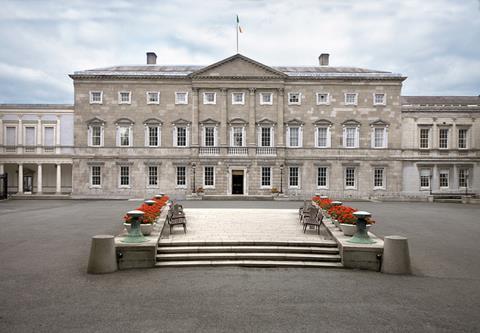 Leinster House, home to the Irish parliament for 100 years

The fallout from the inquiry has potential repercussions for the FRC, which has effectively served as the de facto accounting standard setter for the Irish Republic.

Ireland shares a near identical company law framework with the UK. In addition, banks in both countries follow the same EU-endorsed IFRSs.

Bush, head of governance and financial analysis at PIRC, told the committee that Ireland was in an “anomalous” position, in that the two countries were “intertwined within the FRC structure”.

He explained that Northern Ireland – which is part of the UK – and the Republic of Ireland were “treated as one and, therefore, the UK and Ireland are treated as one”.

This has produced, he claimed, “the bizarre anomaly that the Auditing Practices Board, whose chairman is appointed by [government] in London, [is] issuing guidance on how to audit the Central Bank of Ireland”.

Bush explained, that during his tenure as a member of the former UK Accounting Standards Board’s Urgent Issues Task Force, he contacted Ireland’s former finance minister Brian Lenihan to warn that decisions taken by a committee in London were affecting two jurisdictions.

“I thought it was only right that I showed a degree of accountability to both states rather than just the one in which I happened to be born and lived,” Bush said.

The LAPFF – which represents 78 public sector pension funds with £269bn (€302.5bn) in combined assets – has been challenging accounting standards setters for more than eight years.

In December 2013, an LAPFF report entitled Banks Post Mortem – Follow Up claimed the UK’s accounting framework for listed companies had allowed major banks to keep substantial losses out of their reported net income.

The release of the report followed an earlier LAPFF study in December 2011 into banking losses in the UK and Ireland, titled UK and Irish Banks Capital Losses – Post Mortem.

The 2011 report by LAPFF into the accounting for financial instruments by major banks focused on the collapse of the capital adequacy regime of banks in the UK and the Republic of Ireland.