A public sector pension fund association has hosted an event to allow investors to hear from representatives of communities affected by mining company BHP’s operations in South America as it tries out a new approach to engagement.

According to the Local Authority Pension Fund Forum (LAPFF), the idea for the event – which was held yesterday – stemmed from the positive feedback it had received as stakeholder liaison to the investor initiative on mining and tailings safety that was called into being following the collapse of the Brumadinho dam in Brazil earlier this year.

Councillor Rob Chapman, chair of the pension committee for the London borough of Hackney and LAPFF vice chair, said: “I have been attending the investor tailing dam initiative meetings and have seen what a crucial impact the community input has had on this initiative.

“More and more investors have been approaching LAPFF for information and with ideas on how to integrate community voice into the investment process. This seminar seemed like a good way to facilitate this exchange.”

A LAPFF spokeswoman explained that, at meetings organised in the context of the mining and tailings safety initiative, a LAPFF representative would read out statements from individuals in communities affected by companies’ operations, and that a number of investors had said they found these helpful.

“They have made suggestions for us or asked if they could learn more, and some used the stakeholder voice as input to their company engagement meetings,” she told IPE. 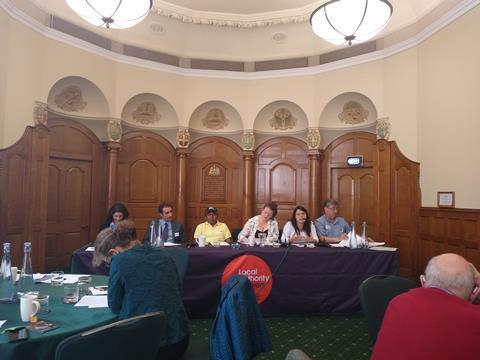 “We thought it would make sense to try to link the stakeholders and investors directly.”

Hopes for more to come

About a dozen investors – from asset managers and local authority pension funds – attended yesterday’s meeting, with trade union representatives among those also in attendance. They heard from visitors representing communities in Brazil, Chile and Colombia.

In a statement, LAPFF said the goal was “to better understand BHP’s environmental and social impacts […] in order to improve outcomes for community members and investors”.

“LAPFF hopes that this will be the first of more events connecting community members with investors to foster better human rights protections as a means of creating more sustainable shareholder returns,” it said.

Yesterday’s seminar was organised in collaboration with London Mining Network, an organisation that for many years has funded the travel of community representatives to London before the annual general meetings of major companies. BHP’s London AGM was last week.

The LAPFF spokeswoman said the industry scope for events such as yesterday’s could expand beyond mining over time, as the association had been approached by communities “affected by housebuilder/developer issues”.