‘Step-change’ in number of UK schemes in funding surplus

The number of UK pension schemes in surplus against their agreed funding target has risen significantly, according to a survey.

Nearly two out of five pension schemes (37%) were in surplus on funding assumptions, according to a valuation survey carried out by Mercer. In the consultancy’s 2015 version of the survey, the figure stood at 27%.

“One of the striking findings from the 2018 survey is the step-change in the number of schemes in surplus on funding assumptions,” said Simon Turner, director at Mercer.

However, he cautioned against complacency, adding: “Trustees and sponsors need to set and agree longer-term objectives to improve the chances of paying members’ pensions as they fall due.”

The consultancy’s 2018 valuation survey, which covered 180 schemes, showed that 38% had not agreed a long-term target.

Mercer’s research also showed that integrated risk management had become a key part of trustees’ decision-making processes. This involves a combined assessment of investment risk, covenant risk and the funding position, and has been advocated by the Pensions Regulator for the past few years.

Three-quarters of schemes were reviewing investment strategy alongside the valuation process, two in three sought external covenant analysis and twice as many received daily updates of their funding position compared with 2015, Mercer found.

“However,” Turner said, “less than 20% of pension schemes have formally documented their approach to risk management which begs the question: are trustees really using the integrated risk management framework to make practical decisions?

“It is clear that there is considerable room for development in this area to aid robust and timely decision making.”

More than half of schemes had carried out scheme specific analysis on life expectancy in the 2018 survey, compared with less than a third in 2015. 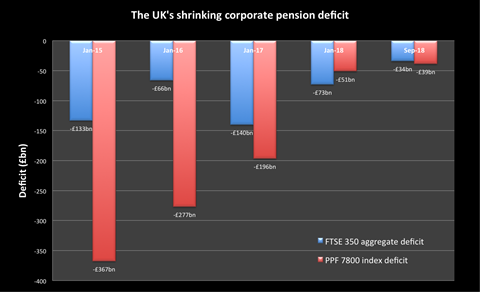