The Church of England Pensions Board (CEPB) has criticised influential proxy voting advisers’ stance on climate change-related resolutions ahead of an annual general meeting of mining company BHP in London next week.

In a statement, Adam Matthews, head of ethics and engagement at the £2.3bn (€2.5bn) CEPB, called on the Principles for Responsible Investment (PRI) to convene “a high-level meeting of climate aware asset owners with the heads of the proxy voting providers to discuss a fit for purpose approach to climate change voting”.

The statement was issued this morning after it emerged earlier this week that ISS and Glass Lewis had decided not to recommend investors vote in favour of a climate lobbying shareholder resolution at BHP. The resolution, which was co-filed by CEPB, calls on BHP to suspend its membership of industry associations whose lobbying activities are inconsistent with the goals of the Paris agreement on climate change.

The proxy advisers’ standard recommendation to investors was to vote against the resolution, with both service providers noting that the final decision was investors’. The BHP board has recommended shareholders oppose.

In the statement reacting to ISS’s and Glass Lewis’ advice, CEPB’s Matthews said their decision “raises serious questions about how investors can receive advice that enables them to meet their fiduciary duties to navigate the financial risks posed by climate change”.

“Our fear is that continued inertia in the proxy voting system will ultimately prevent the objectives of key engagement interventions such as Climate Action 100+ being achieved,” he added. 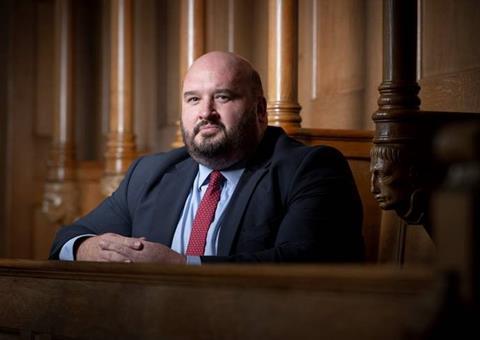 Adam Matthews, head of ethics and engagement at the Church of England Pensions Board

According to the CEPB, as of this morning investors with more than £2.1trn (€2.3trn) of assets under management had indicated they would support the resolution. Aberdeen Standard Investments, which holds around 3.2% of BHP shares, publicly declared its support for the resolution early this afternoon.

Not all proxy voting agencies recommended a vote against the resolution: PIRC, a smaller outfit, recommended shareholders support it.

The ISS and Glass Lewis perspective

Aaron Bertinetti, senior vice president, research and engagement at Glass Lewis, responded to CEPB’s statement, saying that the firm’s clients made their own judgements on proxy voting matters “as required of fiduciaries acting on behalf of the investments and retirements of their beneficiaries”.

The company’s advice was an input to “the sophisticated decision-making processes” they used to do this, he added.

“Climate change is a very serious and material issue, but it is not the only issue that is of concern or required to be considered by fiduciaries”

“Climate change is a very serious and material issue, but it is not the only issue that is of concern or required to be considered by fiduciaries,” said Bertinetti. “[W]e do not blindly support or oppose issue-based proposals, we support some but not others based on whether each individual proposal is in the best interests of shareholders at each particular company.”

A spokeswoman noted that clients can request custom and speciality policies, which can include policies based on sustainability considerations, and also said the ultimate voting decision was the responsibility of the investor, in keeping with their fiduciary duties.

The reasoning behind the firms’ non-tailored voting recommendation on the BHP climate lobbying resolution was roughly similar. Both noted, among other points, that the company was carrying out a further review of its industry associations and was due to publish a report on this soon.

Glass Lewis said BHP had “demonstrated responsiveness” to shareholders’ concerns about positions taken by their trade associations, and that it believed the company was “in the best position to determine what actions to take regarding either productive engagement with or its membership status with its industry associations”.

Fiona Reynolds, CEO of the PRI, said the organisation would be happy to organise a meeting with asset owners and proxy advisory firms.

“As an industry, we must acknowledge that one of the key reasons the world is so far behind in limiting the world to 1.5 degrees of warming is that the negative corporate climate lobby is winning the day with delay and denial,” she said.

Last year the PRI produced a guide to help investors engage with portfolio companies on their direct and indirect lobbying practices related to climate policy.